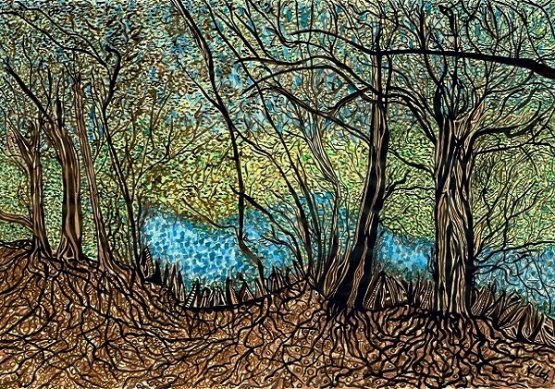 Kerry is a North London born and based artist of Greek-Cypriot ethnic origin. She is a natural self-taught artist who is largely inï¬‚uenced by her London life.

She has gained quite a following in a short space of time and is often described as having a distinct unique line style. Someone once commented that her art was “like Van Gogh from another dimension”.

Creative talent was present in her as a child, however, her career took on a different path.  Her passion for art long remained and in 2004 she began to paint with ink on paper and took part in her ï¬rst group exhibition in March 2014.  People mostly connect with Kerry’s London paintings because of the iconic landmarks they include, however, her main inspiration for their creation came from simple uplifting and sometimes spiritual moments she experienced during her day to day life. She fulï¬lled her ambition to bring her London art together under one roof earlier this year in her ï¬rst major solo exhibition, entitled “London in Different Dimensions”.

This was hosted at the Salvation Army International Headquarters in their gallery located at the mouth of the Millennium Bridge. Alongside her show Kerry raised£1,207.50 for the Salvation Army. The show was a huge hit with the public and the feedback was remarkable, some saying that her collection belonged in the Tate Modern and that people should pay to see it.

Kerry brings a selection of her London paintings to the gallery at Anthony Webb from the 1st of October to the 31st December, including her much loved London landscapes series, which were inspired from the local area - Grovelands Park, Oakwood Park and Cockfosters Road. All art on show is available for sale and on this occasion, 10% of any sales proceeds will be donated to support the UK Thalassemia Society.