Bid for money to restore Broomfield Park Garden of Remembrance 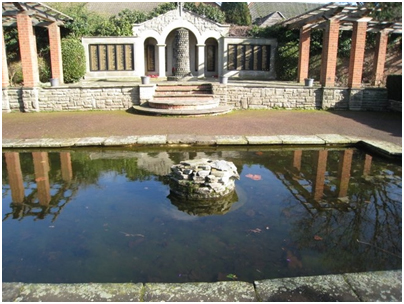 In the centenary year of the outbreak of World War One, the Friends of Broomfield Park are hoping that money will be made available for the restoration of the Park's Garden of Remembrance in Palmers Green, which has fallen into serious disrepair.

The Garden of Remembrance in 2014 - The bid for money is a joint project by the Friends and Enfield Council.  At the request of the Friends the Council last month applied to the War Memorials Trust for a grant of up to £30,000 to restore the remembrance garden.

Opened by Earl Jellicoe in 1929, the centrepiece of the Garden is the memorial temple, which contains granite tablets listing the names of over 400 men who died fighting in the first world war. In front of the temple is a cairn made up of stones whereby each stone represents a life lost by a citizen of Southgate in that war.

Other features are a pond, ornamental pergola and seats made of timber from HMS Dido.

1.    Ivy growing through the roof of the Temple World War 1 memorial temple. Urgent repairs are required to the roof as the slates have loosened (because of weathering and ivy growth) allowing water to get in and damage the decorative oak ceiling and inner stone walls which contain the granite tablets.

2.    Memorial cairn:  Some of the individual stones (up to twenty) are broken as a result of weathering and need to be repaired or in a few cases replaced.

3.    Water penetration into the Temple Paved area in front of memorial.  The York-stone paving slabs and steps down to the pond are uneven and a hazard and have been poorly patched over the years. The broken slabs need replacing and the whole area needs to be relaid with the correct type of cement.

4.    The pond and fountain:  The fountain no longer exists and the plinth is damaged and both need to be rebuilt according to the original design (shown in the 1930s photograph). The flagstones around the edge of the pond are in reasonable condition but need to be re-cemented to match the paved area above.

5.    Handrails for disabled access:  Access to the War Memorial is along a path under a pergola with steps which are difficult for disabled people. Two handrails are needed  to improve access and it is proposed to use wood that matches the original pergola.

The total cost of the work would be £38,500, meaning that if the bid is successful a further £8,500 has to be found - either by the Council or through a fundraising campaign.

Susan Younger, who is leading the project on behalf of the Friends of Broomfield Park, points out that while Enfield Council is planning to spend an estimated £15,000 on a new war memorial, it should make sure that its existing memorial and Remembrance Garden, built in 1929 and of a unique design, does not fall into disrepair.