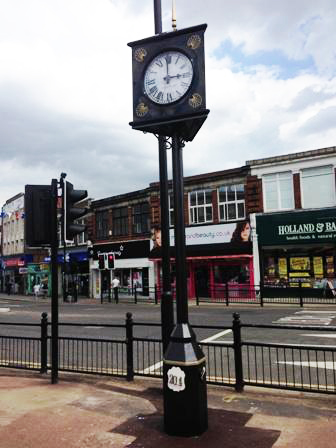 The Green Lanes Business Association (GLBA) are very excited to announce the arrival of the long awaited Landmark Clock just in time for the Palmers Green Shopping Carnival this Saturday.

The black clock, which has three faces and stands 5.5 metres tall, has been installed at The Triangle, at the junction of Aldermans Hill and Green Lanes. The GLBA hope it will become a landmark that will draw more people to the area. Most of Palmers Green’s shops were built in 1904 and they want to commemorate the 110th anniversary of our area with this landmark. The clock’s design is the result of collaboration between the GLBA, Mark Leaver, of the Enï¬eld Business and Retailers’ Association, and graphic designer Kareen Cox incorporating aspects from the local area, buildings and the history of Palmers Green. The body of the tower was manufactured by Dave Plummer, of Triangle Metal Works, which is based just around the corner in Green Lanes, while the clock has been made by the Hawkins Clock Company, in Peterborough. The project has been funded through the council’s Residents’ Priority Fund.

The clock comes four years after the chestnut tree which stood in The Triangle had to be felled because it was dying. Palmers Green has been promised a replacement tree however this has been delayed due to planned works on The Triangle. The GLBA are still campaigning and working with the London Borough of Enï¬eld to get another tree for The Triangle and we will keep you up to date on any new developments.