Will we get quieter neighbourhoods? by Clare Rogers 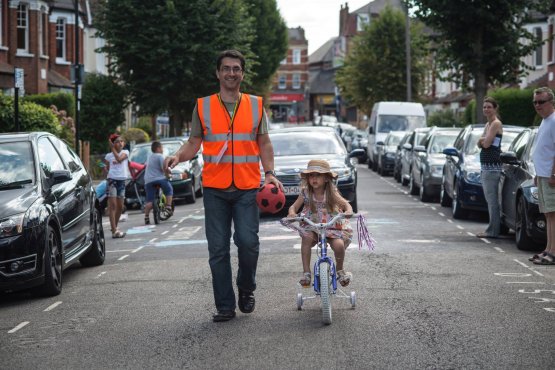 Since June this year, Devonshire Road in Palmers Green has been closed to traffic one Sunday a month for a few hours to let children play safely on the road. This play street scheme has been a great success. Every month we’ve had dozens of children and their parents thronging the street, decorating it with chalk, whizzing up and down on scooters and bikes, and taking time to get to know each other. Residents’ cars can come in and out, but only at walking pace. For a few precious hours our street is a slow-moving, friendly, people-centred place to hang out.

And then we have to remove the barriers and let the traffic back in. Invariably one of the first few cars to reclaim the road is going over the speed limit. (I’ve tried shooting them with my water pistol but they don’t seem to notice.) Within minutes, we are just a road like any other…and a rat-run at that. How can we hang on to that taste of community and freedom outside play street sessions? There’s good news on the horizon: ‘quieter neighbourhoods’. With all the furore about cycle lanes, you may have missed these plans in the Mini Holland bid (now Cycle Enfield). The idea is to remodel 37 blocks of residential streets in the borough so that traffic is slower, and through traffic restricted in some places. This is inspired by the Netherlands’ fietsstraat, or bicycle streets. The areas would have clearly marked entrances, signs and lower speed limits. ‘On these streets automobiles are “guests”’, according to the bid.1 This would create a network of residential streets where cycling is safe, and hopefully allow children to ‘cycle to school or visit friends’.

I’m excited by that prospect for several reasons. Cycling to school is a scary venture at the moment – but joining the 50% of London parents who drive their children less than a mile to school is something I refuse to do. Air pollution causes enough premature deaths in London (it’s linked to one death in 12). Enfield residents are particularly tied to their cars, with roughly a third of all car journeys being less than a mile. So as a family we do the school run to Southgate by bus, scooter, and very occasionally bicycle. It would be a lot less occasional, and much better for my children’s independence and health, if they had a safe cycle route to use.

Secondly, this could have a radical effect on our very own rat run. The culture in many European countries is that pedestrians automatically have right of way on the road, followed by cyclists, then private cars (for instance in Switzerland, where children as young as five often walk to school on their own). Perhaps as ‘quieter neighbourhoods’ come into effect we will see a move in that direction. I’m not suggesting we ban cars – I’m a driver myself and I think cars have their uses – but maybe we can grow a culture that allows every road user and street resident to feel safe and respected. Maybe even on our street, even after the play street road barriers have been taken away. I can dream, can’t I…?

For more on play streets, see www.playingout.net or contact me on chocrogers@hotmail.com.

Clare Rogers is a resident of Devonshire Road, N13, and blogs at www.subversivesuburbanite.wordpress.com

1 Page 28. The Mini Holland bid can be downloaded from the Enfield Council website www.enfield.gov.uk