Truro House, a development of distinction 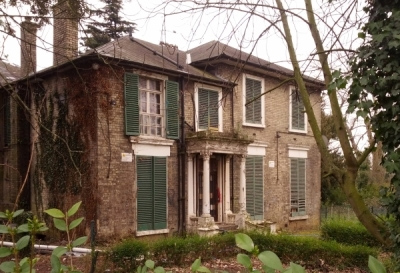 The long delayed plans to restore one of Palmers Greens' most notable buildings – The Grade II listed Truro House, located on the corner of Green Lanes and Oakthorpe Road - are finally set to move forward.

Comer Homes, an award winning developer, renowned for the high quality of its residential and commercial developments will renovate the 2 acre site to include 4 houses and 23 apartments. With established mature trees and views over the New River we have no doubt this development will be a beautiful addition to Palmers Green.

Other local developments by Comer Homes include the impressive Princess Park Manor in Friern Barnet, and they are soon to commence Phase 3 at Tower Point in Enfield with 69 new units, 1 and 2 bedrooms.

Every Comer Homes site has a unique vision and style to produce developments of distinction.

The history of Truro House as featured in our February Magazine

Palmers Green Jewel in the North - The Truth About Truro

One of the most frequent enquiries to the Palmers Green Jewel in the North website relates to Truro House, the building which stands on the corner of Oakthorpe Lane and Green Lanes. It seems like Truro House has always invited curiosity and like all good stories, it is shrouded in mystery.

No one seems to know exactly when Truro House was first built, but we do know that in 1673 the triangle of land between Green Lanes, the New River and what is now Oakthorpe Lane was occupied by a public house. Owned by Enfield brewers Beckett and Ostliffe, the pub was at various times known as the Three

Nightingales, the Rose, and finally the Kings Arms. The last publican to be granted a licence at the Kings Arms was George Airs in 1817 and in 1828 the property was put up for auction.

Around this time it seems likely that the land came into the possession of Sir Thomas Wilde (1782-1858), the first Baron Truro, who lived at Bowes Manor to the south and was Lord Chancellor 1850 to 1852. (There is a blue plaque to Wilde at 2 Kelvin Avenue marking the location of Bowes Manor). If so, Alderman Thomas Sidney (1805-1899) – Whig politician, tea merchant and Mayor of London from 1853-4 - was the next owner. Sidney was responsible for laying out Palmerston Lane in the 1870s, which at the time was on the western edge of the Bowes Manor estate.

However, even though the building seems to have been named after Baron Truro, there is little or no evidence of either Wilde or Sidney actually living there. The reason? Apart from having perfectly acceptable accommodation at the Manor, Truro Cottage, as it was then, was probably simply too humble an abode for your Big-Whig-about-town.

Records of a Truro Cottage begin appearing in directories and post office books in 1861, when Elizabeth Ward is known to have lived there, followed by Charles Foster in 1867 and William Morris, a stockbroker, who occupied the building for much of the 1870s and early 1880s. The first mention of a Truro House comes with the occupancy of Thomas Reynold Roberts, a draper from Islington who had a shop at 222 Upper Street and is known to have lived at the Palmers Green site from at least 1886. It seems possible that he remodelled the building on a grander scale, resulting in its rebranding from cottage to house.

Sometime in the 1890s the house came into the possession of Frederick Penberthy Colliver who lived there with his wife, three sons, and four servants - a nurse, housemaid, cook and coachman. According to Colliver’s grandson who wrote to us recently, two of the sons may have been born in the house and all three of the Colliver boys went on to be mentioned in dispatches in World War One. They moved to Chaudon house in Hemel Hempstead late in the 1890s and the property was for a short time occupied by George H Frank.

1898 saw the beginning of the most definitive and certainly the most stable period in Truro House’s history, a notable one hundred year occupancy by a single family, the Davises. George Davis was a civil engineer. His wife Marie Henrietta Charlotte Davies was French and Davis’s own middle name was Emile; perhaps this gives us a clue as to why the apparently already ‘French’ appearance of the house appealed to the family and the style of the renovations they undertook in the years that followed. George was a founder of Davis and Timmins screw manufacturers, who continued to trade until the 1960s, with works in Brook and Clarendon Road in Wood Green and premises in Kings Cross and Walthamstow.

Davis died of a stroke in 1922 and when his wife also passed away in 1936, the property passed to their daughter Charlotte Davis. She lived at Truro House in the company of her French housekeeper, Mlle Florence Zanotti until she died in 1995 at the grand old age of 98. In 1973 Charlotte sold the eastern part of the land for the building of Honeysuckle House - up until that point the freehold still spanned the full triangle formed by Green Lanes, Oakthorpe Lane and the New River. In 1975 Truro House was given a Grade 2 listing by English Heritage.

I have heard people say that Miss Davis liked to keep herself to herself. Perhaps there will be people reading this article who remember her? Graham Dalling used to tell the story of how, when the Enfield Local Studies Team were based in Palmers Green Library, he and David Pam went knocking on the door, only to be sent away with a flea in their ear.

In April 1999 the freehold of the house and land was sold to Rainbow Properties. It could have been the end of Truro House, but instead this is where things get particularly interesting.

When in 2000 Rainbow applied to build a number of 3 story villas to replace the stable block, English Heritage investigated the history of the house and gardens. What they found and recorded in their report is remarkable: A sitting hall. A panelled drawing room with hidden drawers and cupboards. Stained glass with chivalric motifs and mottos. A rare early use of concrete mouldings.

The alterations of the 1900s, said English Heritage, “can be compared favourably with other interiors of the Arts and Crafts movement.” There was also a ‘near-unaltered scheme of interior decoration of the late nineteenth and early twentieth century’ including a Toile de Jouy wall in the north west bedroom (toile

is a decorating pattern in which a complex scene, usually with a pastoral theme, is printed on a white or off white linen background).

The original gardens had changed little since the ordnance survey map of 1867. Traces of curved terrace to the south of the building can still be clearly seen, as can most of the formal paths shown [in 1867].

The most exciting discovery was that “elements of timber framing and brick noggin, more commonly associated with eighteenth century form of construction, have been exposed in the upper floor landing and in the cellar” which may have been part of the old Kings Arms structure from its last rebuilding in 1775. So parts of Truro House are nearly 250 years old. The overall conclusion: Truro House is a building from the 1830s, built in an uncluttered ‘old French’ style, enlarged and remodelled in the 1890s, and modernised in the early part of the twentieth century, since when it has been largely untouched. The interior, say English Heritage, is “a rare and important survival, worthy of further study.”

And so we come to Truro House in 2014. Overgrown, looking a bit sorry for itself, hanging in limbo. It is in private hands, has some level of protection and is a monumental building with open land leading down to the New River, Palmers Green’s other forgotten wonder.

An application for listed building consent for restoration of Truro House, and construction of two blocks of flats in its grounds (near the New River), was submitted to the Council in November 2008 but appears never to have been decided.

In my perfect dream of Palmers Green, the gardens would be restored and opened to the public, with access to the new river, and the house would be opened as the community centre that everyone says they would love to have for the area.

For more about Palmers Green history and people, visit http://www.palmersgreenn13.com