WHAT COULD ENFIELD COUNCIL ACHIEVE IF THEY BRING IN BEN HAMILTON-BAILLIE TO GET ENFIELD MOVING AND SOCIALISING? By Helen Osman 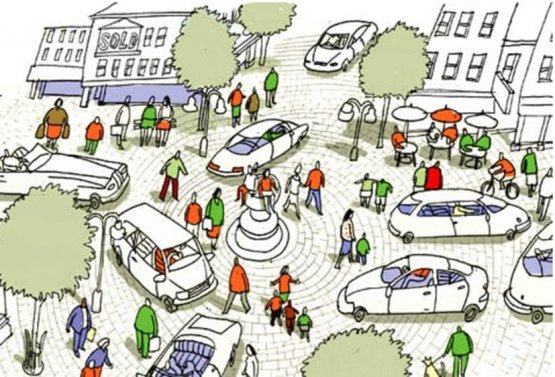 Helen Osman Founded www.n21online.com in 2009, a not for profit community portal for the N21 postcode. Helen has spent a career in business development and marketing consultancy; helping major companies develop new products and respond to changing market trends. This article was first published on n21online.com. Whilst it relates to Enfield Town, this meeting organised by Enfield Town Conservation Area Study group (ETCASG) and The Enfield Society, brought a world authority on traffic management and regeneration to Enfield, to start to explore alternatives to the Council's proposed Mini Holland Schemes.

On a hot, sultry evening in late July Enfield Civic Centre Conference hall was packed to overflowing, with hundreds of people, who had come to listen to a man called Ben Hamilton-Baillie. Most had never heard of him before, but like me, came away feeling inspired and excited about the possibilities to re-invigorate our borough, based on radical but simple ways of "reconciling people, places and traffic".

If you google Ben Hamilton-Baillie, who will find him described as the leading exponent of integrated street design in the UK. He was involved in the highly successful transformation of Exhibition Road in South Kensington, as well as traffic re-engineering projects and urban design projects across the country, including the little Cheshire town of Poynton.

The work undertaken by Hamilton-Ballie Associates in reconfiguring Poynton Town Centre has attracted interest from around the world and won the 2014 Urban Transport Street Design Award, not just because of its success in improving traffic flow across the centre of the town, but also for breathing new life into the town.

There are a lot of similarities between Poynton and Enfield. Both have a high volume of traffic passing through high streets, which have seen better days. The internet and the growth of out-of-town shopping have reduced the need for many people to visit a town centre, but as Ben H-B points out in his presentation "streets are immensely important in defining our economic and social wellbeing". Whilst they are highways, they are also "public realms" and problems arise where the two collate.

We do not yet know how far Enfield Council will follow through with the scheme outlined in the Mini Holland document. We have been told to wait for the public consultation to begin. However Ben H-B's work excited just about everyone in the conference room to alternative approaches to the Council's stated objectives of getting people to be less reliant on their cars, improving traffic flow and regenerating our high streets. Even get people on their bikes.

The examples shown in the presentation demonstrated very clearly that putting cycle highways through our public realms, ie. Enfield Town, along Green Lanes through Winchmore Hill and Palmers Green will exacerbate their problems. To quote Ben, our local streets "are important in articulating our values". They must reflect the values of the majority of the people that use them, not a tiny minority. The objective behind the Mini Holland, now rebranded as Cycle Enfield is to get 5% of people cycling, what about the remaining 95%?

The shared space schemes advocated by Ben H-B are based on the pioneering work of the late Hans Monderman, who has been described as the "traffic engineer who hated traffic signs". These ground breaking shared space projects are based on the premise that the over use of traffic signalling has de-skilled driving and turned drivers into automatons. Perverse as it may sound, if you take away the conventional traffic 'indicators', such as road surface markings, kerbs, traffic signs and crossings; you can actually increase traffic efficiency, and improve safety. Taking away the 'rules' means that drivers have to start to think and pay much closer attention to their surroundings.

To quote from Ben's presentation "it is speed that determines the usability of our streets". Drivers slow down and are much more conscious of the movements of pedestrians and cyclists.

The other benefit is that once these town centres are made more attractive, stripped of ugly street furniture and become easier to negotiate, people come back to them. People linger, visit more often and shop for longer periods of time. This in turn encourages retail and other businesses to invest in the area.

In a recent article co-written by Ben Hamilton-Baillie, he says "Parking and accessibility are key aspects of town centre performance...... The classic village or town car park in France with its trees, rolled scalping's surface, benches, and boule court shows how shared space can work well"

"Attractive streets attract people. People underpin the local economy and towns will only survive if they are places that people want to be, rather than where they have to be".

The meeting was organised by the Enfield Town Conservation Area Study group and sponsored by The Enfield Society, who are as concerned about the Mini Holland proposals for Enfield Town as many residents and business owners are for Palmers Green and Winchmore Hill.

Ben H-B was taken on a whistle stop tour of Enfield and showed a number of slides to illustrate just how cluttered are streets are; with poor traffic engineering, inefficient traffic signals, ugly and under-utilised public space.

After only a brief visit to the borough, Ben would not be drawn on detailed solutions, but the ETCASG and the Enfield Society have done us a great service by opening our eyes to some exciting possibilities. This is a once in a lifetime opportunity for Enfield. Together Enfield Council with the help of Ben Hamilton-Baillie could have the world talking about Enfield not just as the home of the cash machine but for its exciting regeneration programme.

Anyone wishing to comment on these ideas, can send them to helen@n21online.com