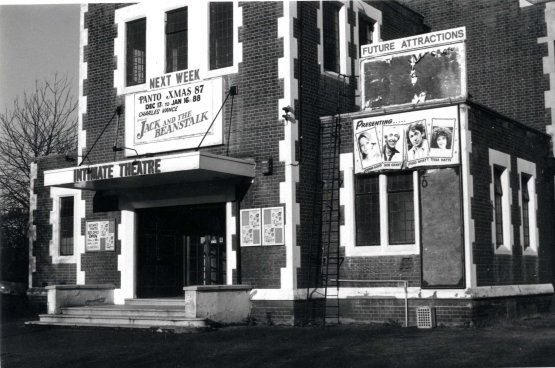 I wonder how many local residents realise that Palmers Green once boasted a theatre that played to packed houses, week after week; featured many future stars in early-career appearances; received reviews from the national newspapers, and in the 1940s made television history. What is more, the theatre is still in use by local amateur groups today.

‘The little theatre with the big reputation’ was one newspaper’s description of the Intimate Theatre in Palmers Green in the late 1930s -an apt soubriquet for this well-loved suburban playhouse. Built as a parish hall for St. Monica’s Roman Catholic Church in 1931, it boasted a stage, fully equipped to accommodate the local drama groups’ demands of the time, a sprung floor, ideal for dances, and a balcony where extra seating could be fitted. A useful building, then, used for a variety of local events, but probably no different from many other church halls up and down the land. However, the fate of this particular hall was to change radically in 1935 when the celebrated actor John Clementstook out a lease on the venue to fulfil his ambition of becoming an actor-manager, renaming it the Intimate Theatre.

The 458-seater playhouse opened its doors for the first time on Boxing Day, 1935 with a production of A.A. Milne’s play The Dover Road. Preparations for any new venture rarely run smoothly and the transformation of this venue was no exception. Fog delayed the delivery of the new tip-up seating for the stalls on Christmas Eve and, when they finally arrived, the workmen refused to install them as it was now Christmas Day! In true theatrical fashion the actors rolled up their sleeves and fitted the seating themselves to ensure the opening night went ahead.

After a week’s break, the company began their policy of staging a different play every week, slowly building up an audience base, with tickets priced at 3/6, 2/6, 1/10 and 1/. Clements gave himself a punishing workload directing more than forty plays in the first year alone as well as playing roles in at least thirty-four of them and dealing with the administration duties of an actor-manager! If this wasn’t enough to keep him fully occupied he was also making films and even found time to get married to Inga Ahlgren in June 1936. The ceremony at St. John’s Church in Bourne Hill was followed by a wedding breakfast on the theatre’s stage.

By the time Clements left the Intimate in 1940 the theatre had achieved a well-deserved reputation for staging first-class productions and audiences flocked to the venue from all over London. Because of the worsening war conditions, the theatre closed from September 1940 to August 1941, when it reopened with local man Frederick Marlow as the new lessee.

It is amazing to see that from August 1941 until July 1952, when the theatre introduced a four week summer break, the management staged a different play every single week of the year, including Christmas week. For the regular actors in the company this meant appearing in a play six evenings a week plus two matinees, whilst rehearsing for next week’s play during the day. At the same time, they were trying to learn their lines for the play that would take to the stage in two weeks time. Hard work indeed!

Marlow employed, as the new director of productions, Ronald Kerr, whose workload was almost on a par with that of John Clements. For the next six years Kerr directed virtually every production at the theatre as well as playing the occasional leading role. Although he left Palmers Green in 1947, Kerr returned to the Intimate in 1950 but his life was tragically cut short in March 1951 when he was arrested for ‘importuning male persons for an immoral purpose’. Summoned to appear before Marylebone Magistrates Court the following day, he never made that appointment, as he committed suicide in the early hours of that morning, just ten days after his last production at the theatre.

In 1946 the Intimate made television history. The fledgling BBC television service at Alexandra Palace decided to present, for the very first time, a live transmission of a complete play from a theatre’s stage and the Intimate was chosen as the venue. The Palmers Green and Southgate Gazette trumpeted the news on its front page: ‘World Premiere In History Of Television: Intimate Theatre Fame’. So successful was this venture that over the next few years fourteen plays were screened from the Intimate with the BBC taking over the car park for these transmissions and setting up three cameras in the circle to relay the plays to television viewers.

Many well-known actors made early career appearances at Palmers Green over the years. Whilst still a student at RADA, Richard Attenborough made his professional debut at the Intimate in September 1941 in a production of Eugene O’Neill’sAh, Wilderness and Roger Moore, later to find fame as James Bond, was fresh from army service when he appeared as juvenile lead in several productions in the late 1940s. Other well-known names to tread the Intimate’s stage include Robert Eddison, June Whitfield, Nicholas Parsons, Arthur Lowe, Patrick MacNee (Steed in TV’s The Avengers), Michael Hordern, Anthony Hopkins, Bob Hoskins, Peter Barkworth, Patricia Hayes, Irene Handl, Bryan Forbes, James Hayter, Eric Portman, Mervyn Johns and Kenneth Williams. The rock icon David Bowie even appeared there for a week in early 1968 with Lindsay Kemp’s dance company.

When one looks at the British theatre scene of the ‘50s and ‘60s two playwrights stand out from the crowd – John Osborne and Harold Pinter - so it is intriguing to find Pinter, under his stage name David Baron, appearing at the Intimate as the second male lead in his contemporary’s most famous play Look Back In Anger in March 1958. Aubrey Woods, who played Jimmy Porter in that production recalls that Pinter was finishing off his script for The Birthday Party at that time.

Changing tastes and the popularity of television saw a sharp decline in audiences in the 1960s. With Fred Marlow’s death in 1964, his sons gamely tried to keep the theatre going but by July 1968 they conceded defeat and a new company led by Howard Kent took control of the theatre. Kent promised local theatregoers fortnightly productions with star names, such as Richard Todd, Penelope Keith, Dickie Henderson and Gwen Watford, but sadly these failed to fill the theatre and by the end of 1969 the Intimate was no longer a full-time professional playhouse. The theatre’s closure, however, was mercifully brief.

Amateur companies were invited to use the facilities and these societies together with occasional professional productions (A youthful Stephen Fry, Hugh Laurie and Emma Thompson appeared in 1982 in a Cambridge Footlights revue) ensured the Intimate was open most weeks of the year.  ‘One-nighter’ professional concerts were also booked featuring such artistes as Matt Monro, Frankie Howerd, Kenny Ball, June Bronhill, Cleo Laine, Frankie Vaughan, Hinge and Bracket, George Melly and Jack Warner and each Christmas a professional pantomime, with stars such as Tony Blackburn, Ruth Madoc, Bill Owen and Shirley Anne Field, filled the venue. The Intimate flourished until St. Monica’s Church decided to reclaim the venue as a community hall in 1988.

Many thought that this was the end of the road for the dear old Intimate but it was not to be. After a year or two of theatrical non-activity some amateur productions returned to the venue and, although it is not used anything like its golden years, today, over 78 years after it first became a playhouse, audiences are still being entertained at the Intimate.

About the Author:
Geoff Bowden is the author of the book INTIMATE MEMORIES: THE HISTORY OF THE INTIMATE THEATRE, PALMERS GREEN which was published by The Badger Press in 2006. ISBN: 978 0 9526076 3 2.

Now out-of-print, copies can be found in Enfield’s libraries.
Geoff gives various talks (including one on the Intimate Theatre) to groups and societies in North London, Essex and Hertfordshire, and is the editor of the British Music Hall Society’s quarterly magazine, The Call Boy. He has lived in Palmers Green since 1975.