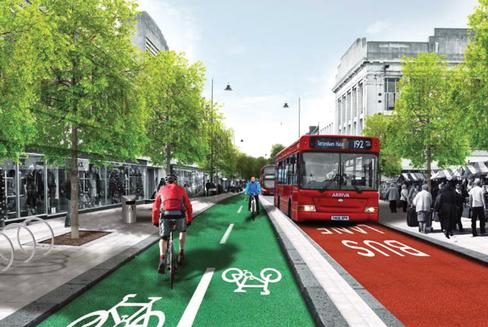 Enfield Council's Cabinet has now agreed the governance arrangements for the delivery of the £27m Cycle Enfield project, formerly known as 'Mini Holland'. They have appointed Ringway Jacobs, highway infrastructure engineers to undertake detailed planning and modelling of the cycle routes, a process which has already started, but will take a number of months.

Ringwood Jacobs must advise on where the North – South Route will run. Whether this will be along Green Lanes, or "an alternative alignment that leaves the A105 somewhere south of Green Dragon Lane and uses quiet residential roads to Bounds Green".

There will be a public consultation, but there is concern that what is proposed by Enfield Council is insufficient, given the magnitude of this project, despite the Council’s assurances that it will consult widely.

The consultation will be undertaken via Cycle Enfield Partnership Boards, one for each project. Here is who the Council is proposing to invite to participate.

THE KEY AREAS OF CONCERN ARE;

Residents are not being fully consulted

Inviting ward councillors and local residents groups to represent residents is insufficient. Whilst residents associations do an excellent job, only a minority of residents actually belong to them. Schools, parents, groups like Age Concern, The Over 50s Forum should and must be consulted. Some of the proposed changes, such as removal of bus lanes in favour of cycle lanes, could make it much harder for parents with young children, the elderly and people with disabilities to access buses.

All residents who live along the routes and who live in Palmers Green, and Winchmore Hill must be given the right to have their views considered during the design process.

Surely the residents should take precedence over cycle groups who cater for a tiny minority of residents/rate payers?

The assumption, stated in the bid document, that all residents should be able to undertake journeys of up to 8 miles by cycle, just doesn’t stack up with how we live our busy lives, our desires and capabilities or the needs of anyone wishing to purchase anything larger than can be carried in a backpack or cycle pannier.

Insufficient consultation with businesses along the proposed routes

Enfield Council is proposing that Enfield Business & Retailers Association represent local business interests. Yet EBRA is directly funded by the Council, so is not fully independent. The phrase “not wanting to bite the hand that feeds you” springs to mind.

The Council's document claims that "The Mini-Holland project will contribute to the growth agenda by regenerating the town centres that the main cycle routes pass through".

At this stage it is unclear how the cycle scheme will achieve this. It is unclear what additional risk assessment – if any - the Council intends to undertake to assess the economic impact on the business base along the routes of the proposed continuous cycle lanes. Should the designs result in cycle routes which hamper customers' access to local businesses, this could result in a significant reduction of turnover of many of the businesses along the routes, leading to degeneration not regeneration.

Enfield Council has suggested that the cycle highways will "significantly improve the health and wellbeing of Enfield residents". However, it could be argued that the benefits that will be derived from the cycle network are being overstated. The target is to get 5% of journeys undertaken by cycle (currently 0.7%). Therefore, only a very small minority of residents are expected to utilise the new bike routes. They are unlikely to include residents whose health is most at risk, such as the obese and those with multiple problems associated with deprivation.

Moreover, if the flow of traffic through the borough is restricted, because of the reductions in carriageways, traffic congestion could worsen air quality and hence health of residents in the areas affected. Local people must be involved during the design process. Residents and business owners not fobbed off with a one-off consultation once detailed plans are drawn up.

Enfield Council has a history of ignoring the outcome of other public consultations, so local communities must be given a real say in the planning. This must not be a tick box consultation. This is a major project which represents an opportunity to improve the quality of our streets, get more people to cycle and help to regenerate many of our local high streets, by making them more appealing to local people. To quote a phrase from the recent Scottish referendum debate “Better together”.

As featured in our Oct. Palmers Green & Southgate Life Magazine

David and Teresa Colman of The Only Place for Pictures in Palmers Green have written an open letter to Enfield Council officers on September 17th, explaining their concerns regarding the Mini Holland/Cycle Enfield Project. 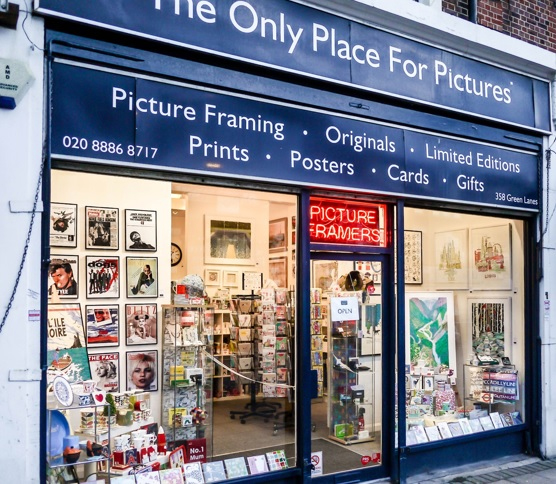 We are writing to you regarding the Mini Holland proposals which we understand will involve a cycle lane being introduced in Green Lanes from Enfield to Palmers Green Library and the consequent removal of pay and display car parking and bus lanes along this part of Green Lanes.

We have been resident in Palmers Green for over 30 years and had a retail shop and picture framing workshop, in Green Lanes, opposite the Fox Pub for the past 10 years. The implications of the Mini Holland proposal fills us with dread and this is not an anti cycling response but a genuine fear that it is a leap in the dark, that can only have a negative effect on the health of an already suffering High Street in Palmers Green.

Our key concerns are broadly as follows:-

1. The Effect on Buses

Whilst cycling does provide an alternative to the car we understand that only 0.7% of Enfield's residents currently cycle, and whilst it is hoped to increase this figure to 4% plus, this still means over 95% of residents will not be cycling. The real viable alternative to the car is the bus and the only way that they can operate efficiently is as a result of bus lanes; without which traffic congestion would be even worse.

2. The Effect on Trade for Local Shops

Many shops including our own sell products that cannot be easily and safely transported by bike. A 60x80 cm picture framed with glass is simply not a safe option on two wheels. We therefore have to accept the reality that the car and bus are the best means of travel and based on projected figures will be so for over 95% of the population. Therefore bus lanes and parking are essential.

You have only to look at the amount of land that Morrisons in Palmers Green and Sainsburys in Winchmore Hill allocate to parking, to realise the importance that these two incredibly successful companies place on providing adequate parking for its customers. We understand that the pro Mini Holland supporters have statistics that say that removing High Street parking will not have a detrimental effect on trade for local shops. If this were the case they why don't Sainsburys and Morrisons remove or greatly reduce the amount of car parking space that they offer and increase the size of their retail space as an obvious way to increasing revenue. They won't do this because they know they would lose customers and lose sales – just as we will in the high street if parking is reduced in Palmers Green.

3. The Health of the Community

We all recognise the problems of obesity in children and adults alike – diet and exercise are a key factor in resolving this issue. However, the provision of a cycle lane in the Enfield section of Green Lanes is not going to result in children/adults leaving their computer games and other gadgets and suddenly jumping on a bike – be real!

4. The Safety of Cyclists

Two of our employees currently cycle to work – one across the Borough from Edmonton and one up Green Lanes from Holloway. They both say they are relatively happy with the current overall arrangements, but the biggest problem is the poor physical state of the roads. In particular, poor drainage and pot holes – both of which can cause the cyclist to suddenly swerve without having time to signal or check that the road is clear and result in a collision.

5. The Cost of the Project

I appreciate that funding or part funding is from the Mayor's budget but ALL public expenditure is basically tax payers, i.e residents money. We as individuals and businesses provide ALL the money that you spend on our behalf. I simply cannot believe that the cost of stripping out bus lanes, pay and display street car parking, changing road junctions and the amount of Council time debating and communicating the issues of this project that is designed to help 0.7% rising to 4% plus of the residents is good use of OUR money. I do not wish to ignore the needs of any minority but I genuinely feel that more consideration should be given to the needs of the 95% plus of the residents including disabled and elderly people who physically cannot cycle, who can only be negatively affected by the impact of the Mini Holland proposals.

I understand that you are entering the consultation stage of this process and ask that we are invited to attend all relevant meetings to express the view I outlined above.

The Only Place For Pictures Ltd