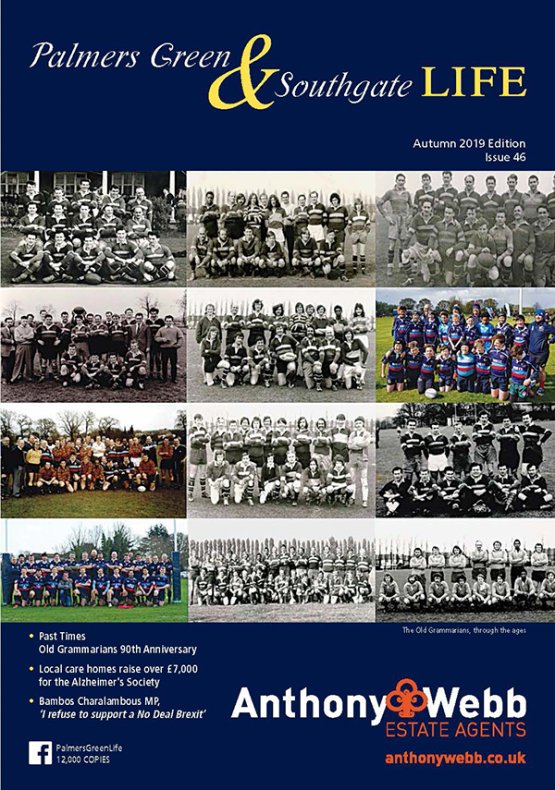 Where World's End & Green Dragon Lanes meet near Highlands Village you will find Old Grammarians RFC - one of the oldest rugby clubs in North London.

The club was founded in 1929 by former pupils of ‘The Grammar School, Tottenham’ who wished to continue playing rugby together after leaving school rather than joining Upper Clapton or Saracens, the other local options.
The Grammar School itself no longer exists, but had a long heritage, potentially back dating to 1456. The school emblem was taken from the coat of arms for Sarah Seymour, Duchess of Somerset, a seventeenth-century benefactor, which in turn became badge for the rugby club. Whilst the Club has been open to all members of the public for many years, the name and badge remain as a reminder of its origins and are reﬂected in the ongoing tradition, spirit and friendliness of Old Grammarians RFC (OGs).

OGs was not the only sporting legacy of the Grammar School - in 1882, pupils from the same school helped form Hotspur Football Club, which subsequently became Tottenham Hotspur F. C.

Over the years OGs has led a somewhat nomadic existence. The ﬁrst match was played against Gravesend on 20th September 1930 and following a season of away games the Club established itself at Ladysmith Road, Enﬁeld in September 1931. In 1936 the Club began to use the school pitches at Queen Street, Tottenham. The clubhouse was moved to Percy House on the High Road near White Hart Lane, where it remained until the outbreak of the Second World War. During the war a joint team of OGs and Old Tottonians, known as Tottenham RFC, was ﬁelded from time to time. After the war the Club re-grouped for the 1946/47 season, and during the following years took up residence in the now-legendary cellar at 11 Bruce Grove.

In 1974 the Club lost the use of the Bruce Grove cellar and consequently for some years members were to be found after the game at the British Legion, The Railway Tavern et al. Establishment of the 100 Club by Barry Nicholl enabled OGs to build up its ﬁnances and eventually, with a mixture of grant aid, and generous contributions from the Grammar School Old Boys, players and ex-players, the Club was able to purchase the Church Hall at Denmark Street. Thanks to the sterling efforts of Ken Stapleton and several working parties the Club ﬁnally occupied its new home under the shadow of the Spurs ground in 1979.

The Queen Street pitches had been the OGs home ground since 1936, but for many years it became clear that the local council had other plans. This resulted in yet another move, this time enabling the Club to consolidate pitches and clubhouse with a move to its current location in Winchmore Hill where the refurbished pavilion was opened in 1996 by England rugby legend Peter Winterbottom MBE.

Now in its 90th anniversary year, and under the continuing stewardship of Keith McGuinness BEM (who also enters his 40th season as OGs President) Old Grammarians RFC continues to go from strength to strength. In August 2016 OGs gained afﬁliation to the Rugby Football Union - a mark of quality in the rugby world. September 2018 saw the launch of OG Unicorns - a dedicated girls and women section, and in June this year the Club won Middlesex Rugby’s Presidents Award for ‘Growing the Game’.
In addition to two senior sides playing in the Hertfordshire & Middlesex Merit League the club has a thriving junior section offering rugby coaching to children aged 6-18 and is always on the lookout for new players of any age or experience. New members and visitors can be assured of the warmest of welcomes - so why not pop along and see why we are all extremely proud to be a part of the Old Grammarians rugby family.