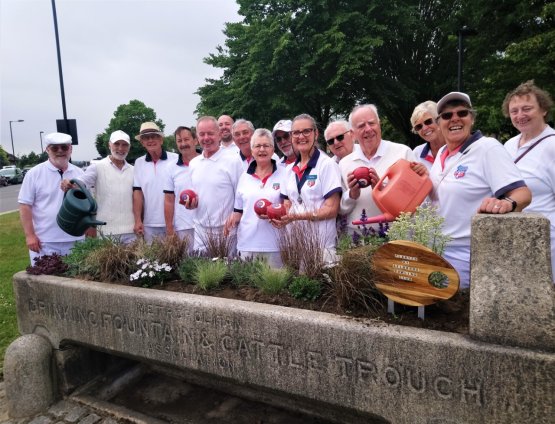 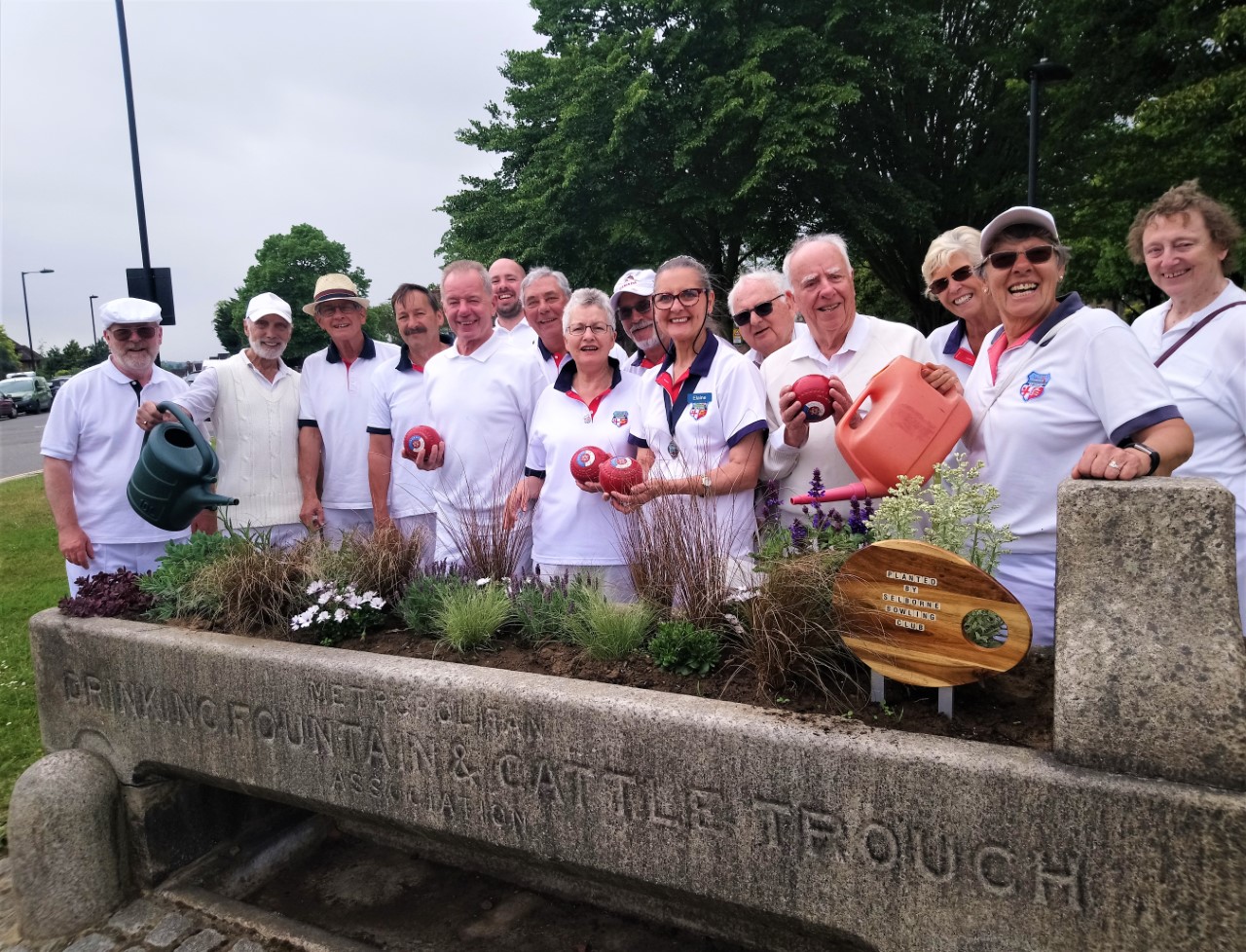 Members of Selborne Bowling Club were gathered next to the horse trough on The Green, Southgate, opposite The Cherry Tree pub on Sunday to admire their handy work. The bowlers had taken time out from their bowling championship match being held on the clubs bowling green located behind The Cherry Tree pub.

Horses are rarely seen now on the roads in Southgate but were once a common sight. Cars have now replaced carts and carriages. Petrol stations have replaced drinking troughs. There are presently nine remaining drinking troughs located in Enfield and these have all been planted out. Selborne Bowling Club took the community initiative to plant out this trough to brighten up this part of The Green opposite their club.

This is a typical horse and cattle trough made from granite and is nine feet six inches long with a drinking fountain at one end and a water trough below for dogs and sheep. The trough was installed by The Metropolitan Drinking Fountain and Cattle Trough Association in 1886 at a cost of £50 and was paid for by public subscription. The Association was set up in 1859 by Samuel Gurney MP to provide free clean drinking water to support animal welfare.

In the 19th Century, London was short of public drinking water fountains and cattle drinking troughs and there was a need to provide clean sources of water in urban areas to meet the needs of horses transporting goods and people and for cattle and sheep being driven into central London on market days.

In the early 19th Century the supply of clean drinking water in London was of major concern, cholera had been epidemic in 1854 and the growing population put increasing pressure to supply clean drinking water. Beer had been a safer alternative to drinking contaminated water and to counter this the Temperance movement encouraged and helped to fund public drinking water fountains located opposite public houses and coaching Inns.

The Troughs were funded by public donations and by wealthy philanthropic Victorian patrons; together with support from The Royal Society for the Prevention of Cruelty to Animals. By 1879 there were 800 troughs supplying the needs of over 50,000 horses in London.

Drinking troughs were the petrol stations of the 19th Century commonly located adjacent to coaching inns such as the Cherry Tree. The troughs were a vital element to facilitate transport and patrons at private establishments were expected to pay for this service or to use the inn. Notices usually stated, ”All that water their horses here must pay a penny or have some beer”.

In 1936 as petrol driven motoring replaced horse drawn transport the installation of water troughs ceased. Selborne Bowling club opened in 1912 and is still bowling strong, pay us a visit and be bowled over.

The Mall, (behind The Cherry Tree) Southgate N14 6LL