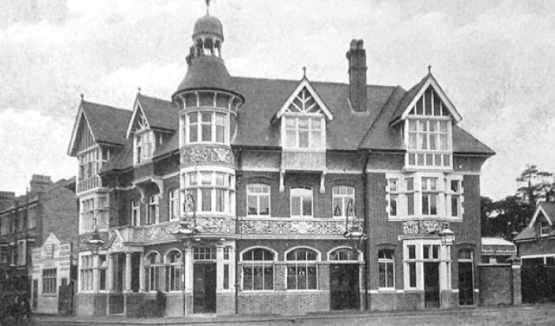 'The Fox' pub is one of the most recognisable landmarks in Palmers Green, but when you pass by you may not be aware that in its various forms it has a long, varied and interesting history.

The old 'Fox Inn', the original village 'local', started life as a country cottage in harmony with its surroundings, a two-storied brick building with sliding sash windows and a pillared entrance looking out onto a quiet and leafy Green Lanes.  A sign board on the upper story showing a fox looking eagerly across Green Lanes was used to advertise its wares and to try and persuade weary travellers to stop and take a drink.  At one time lanterns illuminated the frontage and billboards were propped messily along the front wall next to a sweet vending machine.  At the rear there was a coach house and stables for up to 11 horses. 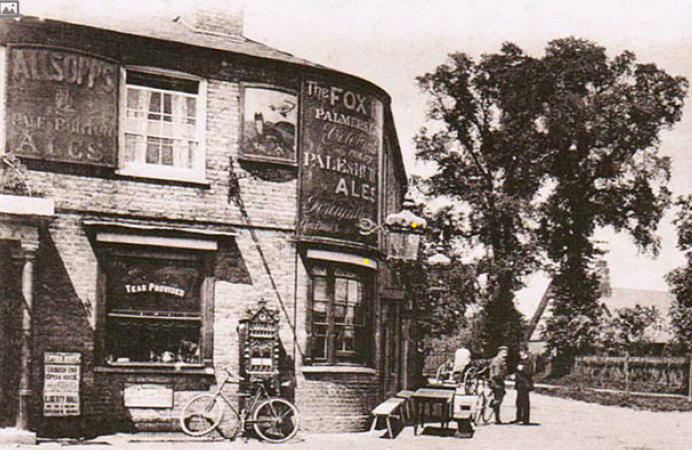 ‘The Fox’ was one of 26 inns in Edmonton in the mid-18th century, and one family that had a long association with it at that time was the Storey’s.  In 1722 Joseph Storey took what might have been the fairly controversial step of changing the name to 'The Doe'.  It must have proved to be an unpopular choice in the long run because over the next thirty years the name reverted back to 'The Fox and The Doe' before reappearing again in 1752 back as 'The Fox'.

In 1801 the inn was the freehold property of R.T.Williamson.  Requiring a corn rent of 1s 7d per annum, payable to the Vicar of Edmonton, by 1834 its rateable value was £48, second only to the 'Kings Head' in Winchmore Hill.  Its clientele was almost certainly a varied bunch because it was able to boast a licensed tea room alongside serving as the meeting place for the ‘Society of Tradesmen and Labourers’.

By modern standards the mid nineteenth-century provision of pubs in the area was extensive and so it was no surprise that a large number of local court cases were drink related. Driving under the influence was sadly no stranger to the courts, although in those days charged as “drunk in charge of a horse and cart”!

In June 1870 Belinda Davey became licensee, paying a rent of £70 per annum for the privilege. It was Belinda's enterprising husband Robert Davey that had the bright idea of taking the drink to the people.  Every Sunday he used to hitch up a wagonette to an old black horse, fill it with ale and take it on a circuit selling to thirsty customers on the main road, Hoppers Lane, Dog and Duck Lane, Bourne Hill and then back home.

In those days the service we expected of our local publican did not stop at the saloon door.  Long before any motorised transport or the coming of the railway, public transport relied much on the enterprise of innkeepers.  The prestigious 'Illustrated London News' of June 1860 included in its columns an article, complete with an illustration, of an omnibus run by Robert Davey at 'The Fox' and housed in one of the large wooden sheds at the rear of the Inn. Indeed with his keen entrepreneurial eye, Robert Davey was the first operator to order and run a bus designed with a spiral staircase for access to the top deck, gradually replacing the slightly precarious older method involving a straight iron ladder at the rear (Of course this is not the only famous bus connected to the pub as keen eyed cinema-goers would have spotted 'The Fox' in the Hollywood block buster  ‘Harry Potter and The Prisoner of Azkaban’ when Harry travels through Palmers Green in a three story omnibus!).

The Davey family established themselves in the area through several gene rations. Arthur Davey was born in 'The Fox' and he went on to become a highly respected and popular member of the community.  His rise culminated in him being elected as a member of the Southgate Urban District Council in 1901 and upon which he served for 18 years.

In 1902 'The Fox', at around 200 years old with about 1 ½ acres of land, was sold for the princely sum of £11,020 to brewer Huggins and Company.  In 1903-1904 Arthur Davey as landlord witnessed the demolition of the old inn to make way for the grand Edwardian Public House that graces our High Street today. This was an action entirely in tune with the sprint of its time, great change was abreast and the growth of Palmers Green was well underway.

Arthur’s community spirit remained strong for many years, and so it was that at the end of the Second World War his son-in-law Leo Whalen arranged charity billiards matches to raise funds for the Royal Northern Hospital annexe in Grovelands Park, then being used as a convalescent centre.

The Davey’s family association with the pub finally ended in 1967, and in 1973 the function rooms were extended and turned into a restaurant.  It was into this space that a fringe theatre group moved and at the end of the 1980’s a group called the ‘Company of Wolves’ were performing 5 nights a week.

In 1994 the old function rooms were extended once more to create a theatre and the pub maintained a strong association with live entertainment encompassing theatre, music and comedy.

Of recent years the pub has seen an extensive development programme transform the site whilst maintaining many of its exterior features. One Fox Lane is due to be completed in December 2021 and will offer 54 luxury apartments surrounding an internal landscaped courtyard, a refurbished gastro pub along with a gym on the ground floor.