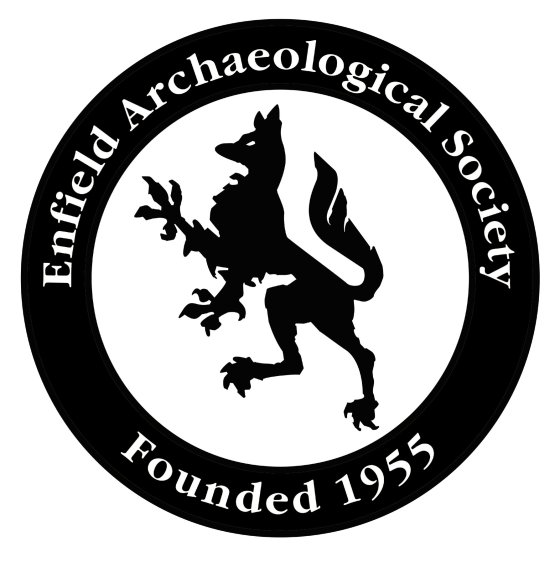 The Enfield Archaeological Society has been excavating, researching and publishing on all aspects of the past of what is today the borough of Enfield for nearly 70 years. Our work in the 1960's and 70's located Ermine Street, the Roman road that runs north south through the borough and the small Roman town that lies beneath parts of the Bush Hill Park area and found the lost Tudor royal palace of Elsyng which is buried in the grounds of Forty Hall. Our professionally led team of ordinary members of the community continues to excavate further elements of all of these sites as well as, often on behalf of the borough, investigating and monitoring sites of all periods.

Our most recent work, a few months ago, was in Broomfield Park (Palmers Green) where we revealed the original Tudor entrance to the water gardens around the house and projects in the last few years have ranged from recording large public WWII air raid shelters in Pymmes Park, Edmonton to investigating finds of Ice Age mammoths in local gravel pits. Many years of small excavations in Bush Hill Park residents’ back gardens allowed us in 2017 to publish a substantial book detailing what Enfield was like in the Roman period and reconstructing the development of the Roman town that lay alongside Ermine Street and acted as a ‘services’ for travellers along this nearly two thousand year old ‘motorway’.

By contrast, our annual excavations in the grounds of Forty Hall focus on the Scheduled Ancient Monument of Elsyng Palace, built and lived in by several national figures such as Sir Thomas Lovell, a key member of the governments of Henry VII and Henry VIII, and then acquired by the latter. Both the location for Edward VI being told he was king on his father’s death and a childhood home of Elizabeth I, we are slowly revealing what made this grand palace of Elsyng tick, such as the large furnace pictured which would have fired a huge vat in which to boil joints of meat for the royal table when monarchs visited. Blogs on our website (www.enfarchsoc.org) detail the day to day progress of past and current seasons of work on the site, there is an open day each year (in 2019 on the 27th July) and we welcome local people who want to join our digging team (details on the website).
Tweet