A foolish day for change By Reg Hart 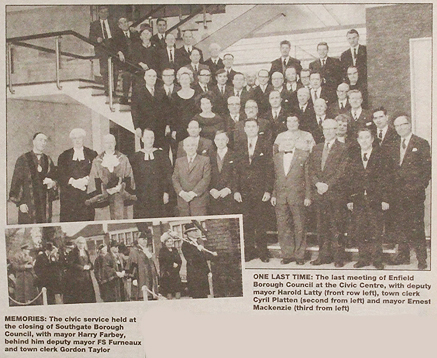 Written by local resident Reg Hart, this article was originally published in the Gazette on September 28 2006.

The thirty-first day of March 1965 was a sad day for me being the final twenty-four hours of true local government in London.

On April fools day, the London Borough of Enfield officially came into being having taken over the services provided by Enfield, Edmonton and Southgate Boroughs Councils.

I doubt if any of the residents in this area of north London wanted such a change to take place as there was contentment with the standard of services provided and the rate demands were not excessive.

Streets were regularly swept and at the end of the broom one tended to see the same smiling face week after week.  Trees were pruned back annually to a size in keeping with the road.

Dustmen were quite happy to take the time to walk along side alleyways and even to the rear of houses in order to collect the dustbin.  They would empty the contents into the dustcart and return the bin to the exact location from where they had found it not forgetting to carefully replace the lid.

Our parks were maintained to an extremely high standard.  The lawns were regularly mown; the flowerbeds were very colourful three seasons of the year and also well maintained throughout the winter months; the footpaths had neither cracks nor weeds and ‘old parky’ the park-keeper, was always to be seen  ensuring that all users  respected the council byelaws.  We even had decent public conveniences.

For Southgate,  often referred to as ‘the queen of the boroughs’, the Town Hall was situated in Green Lanes [which still survives as an administrative building to this day]. Visitors to the grand old building were greeted by a smart friendly doorman who directed you to the correct office - whether it be that of the Borough Engineer, Town Clerk, Treasurer or Medical Officer of Health.

Councillors actually lived in the ward that they were elected to represent. If there was a cracked or dangerous pavement they would stumble across it on their normal daily travels and ensure that the Borough Engineer got a couple of men on the job the very next day.  But that was not the end of it; an inspector would then be sent along to ensure that the work had been completed to a satisfactory standard.

In the council chamber, all business was conducted in a highly efficient manner with extreme politeness. Decisions were based upon common sense and appeared to be devoid of extreme politics probably because the majority of Southgate councillors stood as Independents.

It was all change on that fateful 1st April.  Those councillors wishing to retain their seats invested in blue rosettes. Some writers claimed that the ‘neutrals’ had been Conservatives all the time in sheep’s clothing and were now showing their true colour(s). But it was Labour that had the first go at steering the new authority.

I am now quite happy with the fact that ‘Enfield’ was chosen although at that time I took the view that a new name should have been created but never got around to devising it.

Some of my friends thought ‘Edmonton’, which had become a borough in 1937, would have been a much better choice.  ‘Southgate’ had gained its borough charter four years earlier than that, but never seemed to be in the running for further elevation.

Enfield was seen by some people as the minor of the three boroughs, despite its acreage, because it was an Urban District Council up until 1955.   Going back into history, both Edmonton and Enfield could make very strong individual cases for the newly formed borough adopting their name.

I was well aware of all the preparatory work that had to be undertaken in order for everything - well nearly everything – to be in place for that official first day.   Elections had been held, the new committee structure set up; and for employees it was either business as usual, a move to another building or early retirement.

The benefits of the new borough extolled at the time were that it would be a more efficient local government service with less bureaucracy with a reduction in staffing levels – two of the three Town Clerks [nowadays called the Chief Executive Officer] for a starter, would be surplus to requirements.

Also, residents would gain from the services formerly provided by the Middlesex County Council, which included Education and Welfare [now known as Social Services] coming under the same umbrella.

People of my age that were around before 1965 will be in a position to form their own opinions as to whether or not the amalgamation was really necessary.