A state of the art library in Palmers Green 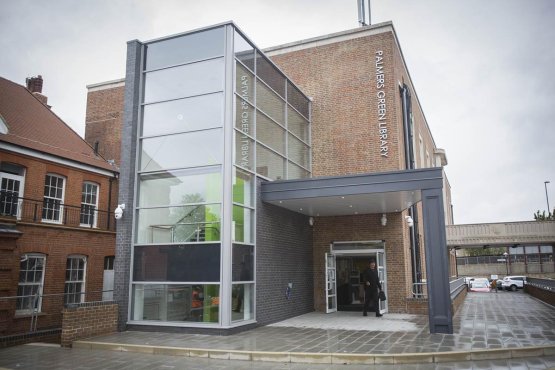 When I was a child, I would spend every hour I could after school and on Saturday afternoons in my local public library. I just loved the fact that I could read any of the hundreds of books there. My local library, like many up and down the country, opened up huge possibilities for learning. Many children, like me, couldn’t afford to buy books, but we could borrow and that gave us access to a whole new world. I learnt new words, found out about the past, and imagined the future. I was introduced to authors and their heroes and even fancied myself the hero of the adventures I read about. As a young mother in Palmers Green, I was able to take my children to their local library and introduce them to the knowledge they could find in books. They had their favourite authors and loved story-telling time, and, later, found books to help with their homework. Times change though, and in today’s era of smart-phones, instant internet access, kindle, TV on demand, social media and downloading the news, the library of my childhood would be out of place. But the desire to learn, to be informed, doesn’t change, so our libraries have changed to meet the new challenges. Municipal libraries have a proud tradition of opening up knowledge, literature and the sciences to everyone. Before the 1850 Public Libraries Act, libraries were mostly private. It wasn’t, however, until the 1900s that public libraries became widespread and flourished. Here in Enfield, the local board of health adopted the Public Libraries Acts in 1892 and opened a temporary library in Gentleman’s Row in 1894. Other libraries followed, and Palmers Green library was opened in 1940 as part of Southgate Town Hall. Since 2010, as a result of Government “austerity” cuts, 343 libraries across the country have closed, 174 have been transferred to community groups and 50 handed to external organisations to run. This in the face of a survey last year that found 72% of people say that libraries are essential or very important to their community. Amongst the debris of library closures across the country as a result of Government cuts, we here in Palmers Green were able to celebrate a complete refurbishment and re-opening of our library. It is one of five flagship libraries in Enfield. It is a library fit for our times and kitted out with up-to-date communication tools. It has interactive tables, a gadget bar with internet access, electronic noticeboards and digital endpanels. It has a bright, inviting children’s section, teenage area and a community room. There is a customer access point to locate council services through “My Enfield” accounts and the council website. And, of course, it has books. People visit Palmers Green library for many reasons - to use the computers, to study, do homework, read newspapers and magazines or borrow books and other materials. It’s great to see students from our local schools using the equipment. Our libraries are important social institutions, open to all residents without discrimination, and I believe they enrich the lives of those who use them, young and old alike. Palmers Green library is no exception. It is a lively centre for our community thanks to the commitment of your Labour council.