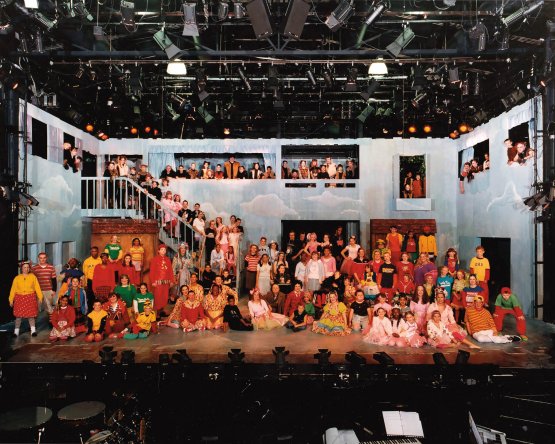 The Chickenshed story began in the hearts and minds of two remarkable local women – and this extraordinary journey began in a church in Oakwood in 1974.

Mary Ward, a primary school teacher, had just moved into Palmers Green with a young baby, and she met Jo Collins (a musician and composer) at Christ the King Church on Bramley Road, Cockfosters. Both women shared a belief that by harnessing the creativity in everyone and anyone, together you can make magical theatre and beautiful music. With their unwavering resolve they decided to start a theatre company in the only place made available to them - a disused chicken shed! Their mission was to bring people together of all ages and backgrounds to produce outstanding theatre that entertains, inspires, challenges and informs both audiences and participants alike. Forty one years later this is still the overriding aim of the Company.

Chickenshed grew slowly at first. Three productions in the first two years culminated in a sell-out production of Alice at the Intimate Theatre in Palmers Green. By 1976, younger brothers and sisters of the first members wanted to join, and so the first Children’s Theatre group was formed, called ‘juniors’. The juniors had barely begun when the eponymous shed gave way to the hiring of church halls. Fortunately the name Chickenshed was retained – Church Hall didn’t have the same ring! By 1982 Chickenshed had begun to attract wider attention - an ITV children’s series called ‘Saturday Action’ gave Chickenshed a regular slot.

1982 was more importantly the debut of a show called ‘Genesis’, which begun a series of events key to Chickenshed’s future. Firstly, the company established formal links with the Cheviots Children’s Centre, run by a certain John Bull. At the same time the show attracted the attention of Malcolm Heyworth, a television producer, who became the first of many to see the quality in Chickenshed’s work and be prepared to put their weight behind it. Within three years the list of supporters included the likes of Judi Dench, Michael Williams, Pauline Collins and John Alderton.

In 1986 the membership had reached the heady heights of 150 and the company became a Charitable Trust. Chickenshed’s profile continued to rise through various TV appearances and West End performances. Ferris in Wonderland at the Piccadilly Theatre was Chickenshed’s first introduction to the West End was made possible by Pauline Collins and John Alderton.

1988 was a landmark year. An evening performance on 13 March hosted by Dame Judi Dench and her husband Michael Williams led to the Lord and Lady Rayne becoming supporters and Lady Rayne agreed to become Chickenshed’s President. It was thanks to her that we were lucky enough to meet Diana, Princess of Wales, who subsequently became our Royal Patron. Also in attendance on that Sunday in March was Enfield’s Chief Executive Brian McAndrew. The following day he sent a memo to every department of Enfield Council instructing them to find land suitable for Chickenshed to build their theatre. Lord and Lady Rayne said they would help us to raise the money for the building. These extraordinary people delivered the dream - a place of our own at last!

As Chickenshed grew so did its output and workload and much of it deserves much more attention than we can manage in this article: 1990 alone saw the first ever Theatre In Inclusive Education project culminating in over 1,000 (and there really were that many) children performing our production, Anansi, at the Royal Albert Hall; a further performance of the same show at Sadler’s Wells, with Diana, Princess of Wales, in attendance; the first performance of our magical show, The Attraction, at the

Shaw Theatre, with such luminaries as Dame Janet Suzman and Sir Trevor Nunn. It was Trevor who suggested that we tour The Attraction (which we eventually did), with a cabaret performance at the Hard Rock Cafe - and we mustn’t forget our first appearance at the Enfield Town Show!

In 1991 our membership stood at over 400. The Attraction, which had become a flagship company production, ran for a week at the Place Theatre in London. Again this proved an extraordinary period. An appearance on Wogan and a double page spread in The Mail on Sunday brought us national attention.

By 1992 the dream of a purpose-built theatre was on the verge of being realised. After disused water works and crumbling Jacobean mansions were discarded, land to the north of Saracens Rugby ground in Southgate was duly made available to Chickenshed. Now it was just the small matter of the money required and Lady Rayne worked tirelessly to help us to achieve the target. This year also sees the beginnings of our famous waiting list, with 450 members and 300 waiting. The first in our Christmas trilogy The Night Before Christmas ran for a sold out week at The Place.

Every year seems to be a landmark year when one looks back. 1993 saw the debut of Paula’s Story, a dramatic recreation of a member’s extraordinary life and our resident choreographer Christine Niering was beginning to develop a unique and innovative style of dance that led to our first ever ‘dance show’ – Signs of Dance. Both shows graduated from the humble surroundings of church halls to the West End the following year. Oh, and with Lord Rayne at the helm, we started building our theatre.

The following year our beautiful theatre opened just in time for the second run of The Night Before Christmas. Obviously that wasn’t enough for Chickenshed, so we released a single Have a Heart at Christmas, we sang at Wembley with Meatloaf and wrote and performed a ten minute piece for the BBC’s Christmas Eve celebration ‘Joy to the World’. Once the theatre opened however, we started getting really busy. We now employed a full time artistic team, all 6 of them, a small administration team and of course Mary, Jo, and John Bull. Our first ever national tour of The Attraction was preceded by our first ever national Theatre In Inclusive Education tour, and before that our first ever full length ballet, The King’s Web. Obviously there were a lot of ‘firsts’ that year. Another ‘first’ consisted of performing to a huge gathering of Heads of State in Hyde Park for the Fiftieth Anniversary of VE Day celebrations. The whole performance was broadcast live to a worldwide television audience of over 50 million and a crowd of heavily armed presidential security guards representing 50 secret agencies. There were more mobile ear pieces and bulging pockets than you could shake a fist at - of course shaking your fist in that area wasn’t a good idea…

A Midsummer Night’s Dream saw Chickenshed engage in a critically acclaimed production of Shakespeare. There was the single release, Mary’s MBE, This Is Your Life, the lottery award for the building extension, the sold out Christmas shows. Also we saw the start of our full time BTEC in Performing Arts, Woking Dance Umbrella, more sold out Christmas shows, a specially commissioned film for ITV broadcast on Christmas day, an appearance alongside the Spice Girls at Wembley Stadium, the ‘Creative Briton’ Award, Globaleyes performed at Covent Garden, the Queen Mother’s 100th Birthday celebrations followed by representing “the future” at The Queen’s Golden Jubilee Pageant in The Mall. Then came Jo’s MBE, a group of our performances going out to Ethiopia to work with young people ravaged by illness and disability caused by war and the legacy of polio - the list goes on and on…

It must be said that many of the original 1970s members are now the core and heart of the company. Some have moved on but the Chickenshed experience remains with them all. Adult lives are now underpinned by the values and skills absorbed during their magical time at the Shed – with an understanding that diversity and inclusiveness should be a way of life. This understanding is just as relevant for members today. Every extraordinary piece of theatre created at Chickenshed shouts out the same thing – that anyone can thrive in an environment where everyone is welcome.

So from beginning literally in a disused chicken shed, the Company now operates from a 300 seat purpose built theatre in Southgate and has grown from 30 members to over 800, with more than 1,000 people coming through our doors every week. We now have a Chickenshed in Kensington and Chelsea too, and our teams have spread the joy of inclusive theatre to people all over London, Europe, Africa, Russia, USA and most recently we have taken an exciting new project to China.

But with all this, the essence of their work – producing the right environment for individuals to flourish – is no different 41 years on.

Back at our base in Southgate, we run highly successful education courses in inclusive performing arts at BTEC, FD and BA level, membership schemes for 5 – 21 year olds and our outreach projects for some of the hardest to reach communities, throughout the year, every year, are highly praised. The BTEC course received the highest OFSTED mark, Rating 1 – Outstanding. The course has 100% retention and 98% pass rate, with a full diploma even though many have not previously been able to access mainstream education. 66% of Chickenshed students would not be permitted to even start a course at other schools, colleges or universities. All students are educated and achieve alongside their peers.

As well as our membership branch in Kensington and Chelsea, we have also set up 19 independent theatre community groups across the UK and two in Russia (which is called the ‘Shedlink’ programme).

The Company has continued to enjoy enormous success up to the present day with highlights including performances at key national events such as the G8 Summit at Gleneagles and the Edinburgh Festival. We have performed at prestigious venues such as The Royal Albert Hall, The Royal Opera House, 10 Downing Street, the BT Tower and most recently in the Speaker’s House at the House of Commons.

All of this seems very grand and we have travelled the most wonderful theatrical journey since our humble beginnings, but we have never forgotten our roots and we want to reiterate over and over again that we are your local theatre – and so much more besides!

We are a local creative hub, producing a huge range of shows and activities across the year in both our main theatre, The Rayne, and our smaller more intimate Studio Theatre. We regularly present interactive shows for very young children (the perfect birthday party destination!) and we have a busy programme of live music and comedy events in our welcoming theatre Bar.

And if all that wasn't enough, we have Brothers Grill at the heart of our building, a wonderful café bar/restaurant – with free wifi – and which is perfect for a morning coffee, a light lunch or an evening meal, and they can also host parties or celebration events in any of our many spaces.

One of the benefits of living in Palmers Green is the great selection of local theatres we have including the Chickenshed, Millfield, Dugdale and Intimate Theatres.