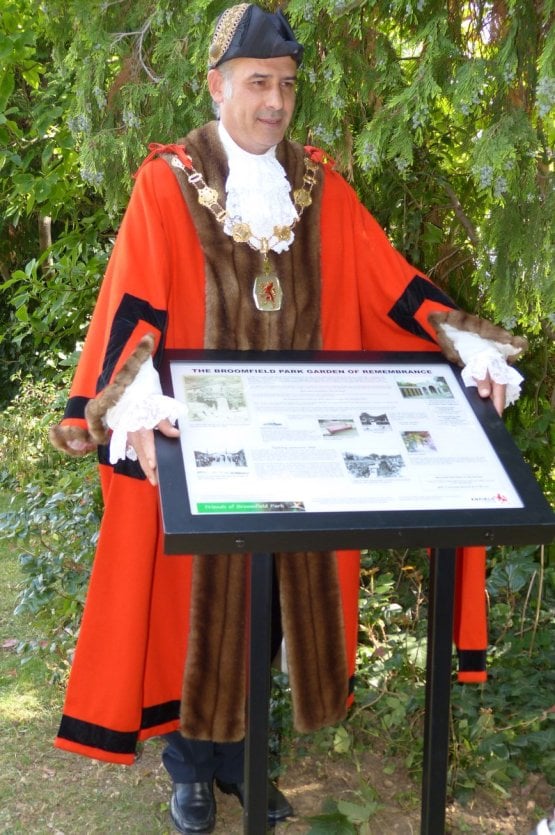 On Monday 4th August, the centenary of the outbreak of World War 1, Enfield Council held a commemoration service at the War Memorial in Broomfield Park (Palmers Green) to remember all those men in the armed forces who lost their lives fighting during the 1914–1918 war.

(Image supplied by Enfirld Local Studies and Archive: 1929, opening of the Remembrance Garden)

The war memorial in Southgate was commissioned after the war as the large number of families who had lost members in the battlefields overseas needed a public place near home where they could remember their loved ones.

Enfield is twinned with the towns of Courbevoie in France and Gladbeck in Germany and the mayors of these two towns, which were on opposing sides in the war, came together with the mayor of Enfield in an act of remembrance for all those who had died.

Cllr Doug Taylor, Leader of the Council, welcomed everyone to the event and stated that we were gathered together not only to remember those who had died but also “to reiterate our commitment to our European friends in Courbevoie and Gladbeck” and this was followed by a speech from Cllr Terry Neville, leader of the opposition group. The Rev. Hazel Miall from Christ Church, Southgate also addressed the audience and Cllr Yasmin Brett, Cabinet member for Community Organisation gave the closing speech.

There was a musical tribute in the form of a medley of well-known songs from the period (including the Roses of Picardy and Keep the Home Fires Burning) and famous poems (including In Flanders Fields) composed by the World War 1 poets and read by members of Enfield Poets. Wreaths were laid by the mayor of Enfield, Southgate British Legion, and local groups followed by a two minute silence.

At the end of the ceremony Cllr Ali Bakir, the mayor of Enfield, led the way to the entrance gates where he unveiled a Visitor Information Board prepared by the Friends of Broomfield Park to commemorate the opening of the Garden of Remembrance eighty five years ago in1929.

History of the Garden of Remembrance

In 1926 Southgate Urban District Council chose the south east corner of Broomfield Park as the site for a World War 1 Memorial and Remembrance garden for the members of the armed forces from Palmers Green and Southgate who had been killed during the war. The Garden of Remembrance was opened on Sunday, July 7th 1929 by Earl Jellicoe, Admiral of the Fleet, and Cllr W. H. Pullinger, Chairman of Southgate Council.

The World War 1 memorial consists of a temple with internal walls covered by 4 plaques with 525 names listed in order of surname, rank and regiment and above are three windows with the inscription “At the going down of the sun and in the morning we will remember them”.

There is a memorial cairn in front of the temple made up of special stones cut from a quarry with the inscription, “Each stone represents a life laid down”.

Originally there were six benches in the garden made from timbers from HMS Dido, a First World War supply ship that was scrapped at the end of the war, but only one bench remains today.

In 1945 Southgate Council decided to extend the war memorial to include those who had died in the Second World War and their names are inscribed on two large plaques on the outer walls of the temple. The plaques contain 573 names of those who died serving in the armed forces and an additional 134 names of civilians on the Home front who lost their lives.

November 11th, there will be a remembrance service in the Garden including two minutes silence at 11.00am which is open to the public. For more details please consult the Friends website at www.friendsofbroomfieldpark.org.

For more information about the war memorials please visit the Garden of Remembrance or consult the archives at the Enfield Local Studies Unit in the Dugdale centre at Enfield Town.