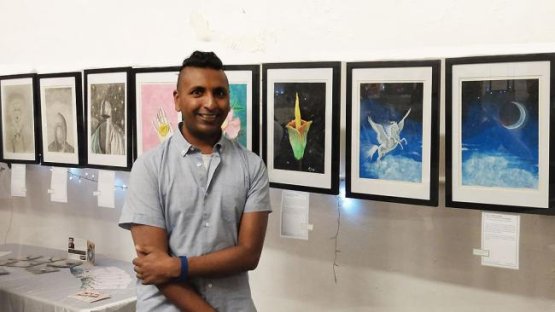 Introducing Patrick Samuel, an emerging artist with Asperger's Syndrome to our Palmers Green Community Gallery this January and February. Having returned to art after a 20-year break, he picked up painting and drawing again when he started his daily art therapy in December 2016.

A time of prolific work as well as recognition followed, and Patrick has embraced his neurodiversity as a gift rather than seeing it as a disability; he’s found his voice and his calling. Marking one year of his creative journey, Patrick hosted his first solo exhibition at the Dugdale Centre in Enfield, which ran from November 7th through December 2nd. With 66 paintings and drawings on display, Escape and Return was an overwhelming success. The private view was chosen by Enfield to launch its bid to become London’s Borough of Culture, and the exhibition was visited by many people from the North London area and beyond. Patrick’s work resonates with people a lot as more than 30 of his artworks have found a new home. Art has changed Patrick’s life for the better, not least thanks to the strong support of the community in Enfield. Many residents have helped him with art materials, frames and canvasses, and local art fairs have provided him with a place to present his work and practice social skills, something very important to a person on the autistic spectrum. Escape and Return wouldn’t have been possible without the support of the Dugdale Centre, the sponsorship of businesses both local and national, and the backers on Kickstarter, many of whom are Enfield residents as well. Patrick has produced an extensive portfolio in a wide range of genres and media. He is stimulated by bold, contrasting colours, intricate details, multiple textures, and varying shades of light and dark. Patrick is working primarily with pastels, graphite pencils and acrylics, but he also enjoys experimenting with water colours, glass and oil paints. Patrick’s work and his story have been recognised in local media, and meanwhile featured in magazines as well as on BBC Breakfast and BBC News online. As a spokesperson for autism awareness, Patrick has been giving talks about the benefits of art therapy, and hopes that by sharing his work and his story he inspires other people who are thinking about venturing into art. Patrick is currently preparing for two more solo exhibitions. Clash of the Icons, which opens on December 12th, celebrates the clash of iconic movie characters and scenes. An ironic look at cinema hits, the exhibition also reflects on Patrick’s favourite stories.