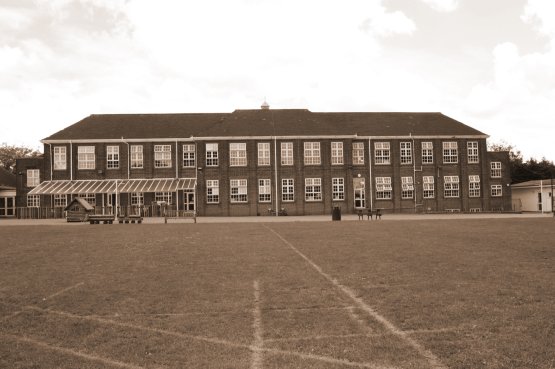 This year Osidge Primary School in Southagte is celebrating its 80th anniversary. But it could have been so different. Just four years after Barnet’s state of the art school had been built four incendiary bombs landed on the field and playground with a fifth hitting the roof and bouncing off.

Miraculously, through the War, both the building and the children of Osidge came through to tell the tale.

Osidge School was the much needed school for the new district of East Barnet which after the extension of the Piccadilly Line and opening of Southgate tube station in 1934 was in the midst of a house-building boon. Osidge was opened in an official ceremony in the Upper Hall on a Saturday in April 1936, by Rev. F. H. Richardson. To this day the building remains almost unchanged, with the signs for the separate boys and girls entrances still visible.

The first school in the area, the catchment of Osidge was much wider than today and many children returned home for their lunch too.    One of our oldest surviving pupils 87 year old Joyce Goldsmith recalls walking to her home towards Arnos Grove every day.

In the 1930’s East Barnet was like living in the countryside. But this peace was to change with the outbreak of War and in particular the Battle of Britain when in 1940 Osidge schoolchildren’s lessons were disrupted daily.    On the outskirts of London, parents of East Barnet children perhaps considered the risks less and less than 50 children took part in the Government’s evacuation programme.

Instead, air raid shelters were built in the playing fields, where they remained until 1970.

80 year old Tommy Wells remembers passing time in the air raid shelters as if it was yesterday.   At the sound of an air-raid each class lined-up and field in an orderly manner down the concrete steps into the underground shelters, where they sat on wooden slatted forms along the side of the walls. Each child had to provide a tin with emergency rations.    “We used to sing our 12 times tables a thousand times over in candle light.”

School life during the war saw a constant stream of drives and knitting to help the war effort.    “We used to collect shrapnel from the bomb damaged sites and hand it over to the ARP warden in Hampden Square to help the War effort” explains Tommy.

Finally in 1945 peace came to England and for the children of Osidge it was a time for celebration. The following year during a victory weekend Osidge was closed for the weekend as London and the whole country participated in the victory celebrations. That same weekend every child in the UK received a certificate from George V.

The truth is that schools like Osidge and so many more around the country and the stories that lie within are monuments to children’s resilience during World War 11. Every community has a duty to capture these stories before they are forgotten for ever.

With the baby boom creating a rising roll in January 1950 Monkfirth Infants School opened which meant Osidge focussed on juniors, indeed boys could only join at the age of 7.

The Fifties marked a new era of confidence for Southgate, like the rest of the country as they came out to celebrate the Coronation of Queen Elizabeth 2

Osidge continued its strong reputation in the 60’s and 70’s. Osidge excelled in academics and sports. No one will ever forget the sporting triumph of 1968 when Osidge won three borough shields. In fact they are still proudly held by the school.

Osidge was proud of its history, the first big celebration being the Golden Jubilee in 1986.    From this date the school has kept a record of its celebrations. The late eighties contains some of Osidg’e most famous pupils. Robert Rinder is now better known as ITV’s Judge Rinder. From the world of music Rachel Stephens found fame as one of S Club 7 and Dan Gillespie-Sells as lead singer of The Feeling. Other famous pupils include Timothy Bell who went on to run Saatchi & Saatchi and become one of Margaret Thatcher’s closest advisors and Alan Coren the editor of Punch Magazine

The story of Osidge during the War will be shared in a special 80 Years Exhibition open at Os-Fest, the family festival taking place on 9th July at Osidge School from 2pm – 10pm (the exhibition closes at 6pm).  Tickets are available by booking online at www.osidge 80.org or on the day.

For more inspirational stories from past pupils that attended Osidge please visit their website www.osidgeschool.org, #OsidgeInspiredMe.