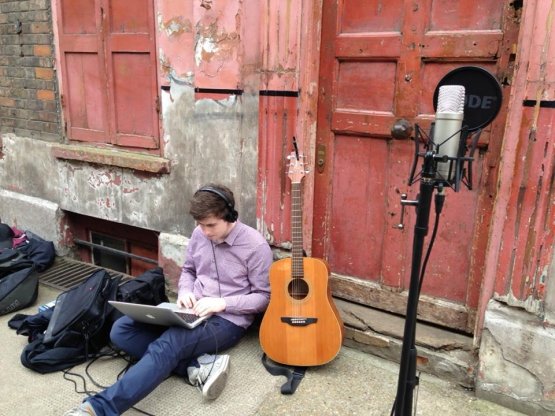 Lester Clayton is a Palmers Green based songwriter who has supported Ed Sheeran, Just Jack, Lemar and Pete Doherty amongst others, and runs various music nights across London which supports the development of local original music at the grass roots level. Stay up to date with Lester on www.LesterClayton.co.uk and on Twitter @LesterClayton for information about live shows and news.

Firstly, I would like to thank everyone who was a part of The Palmers Green Shopping Carnival and The Southgate Festival. The sun came out, the rain stayed off, and everyone had 2 great days full of community spirit. We were lucky to have 2 stages of live music, one ran by myself and the other by the wonderful Dave Thomas who brought his St Harmonicas Blues Club to the streets of Palmers Green and Southgate. All of the artists on both stages were from the area, and put on a great show for their neighbours.

One of the artists who played on my stage on both days was Luke Carey, a 19 year old singer/songwriter who has played at my events a few times over the last couple of months.
I have gotten to know him fairly well since we first met at a local open mic night, and when he told me about his ''100 gigs in 100 Days  for The Alzheimer's Society'' I thought it was something I should share with you all.

His idea is to use music as a medium to reach out to as many people as possible to raise money for a great cause. As I write he is on show 60 out of 100, which has seen him gig in various shows across London, to hundreds of people, and has seen interest from The Edinburgh Fringe Festival who want to feature him to help spread the word.
His Just Giving page has so far raised £1600 and has seen donations coming from all over the UK and America, and has been shared across the internet.

'The overwhelming support I received online instantly made it clear how many people are affected by Alzheimer's and how a charity like the Alzheimer's Society is greatly appreciated. Although 100 gigs in 100 days won't find a cure, if it helps then I'm happy with what this has done'

Musically Luke became inspired to pick up a guitar and write songs after seeing Ed Sheeran on SBTV,  and after a chance meeting with him he has been determined to get out and make a name for himself. When I first met him the comparisons to Ed Sheeran were obvious, this happens with all young songwriters, but slowly, you begin to find yourself musically and create your own sound and image.
Luke's own material is moving away from the songwriter he most looks up to, and having seen gig 1/100 and seeing him on stage at the Palmers Green Shopping Carnival last month you can see how far he has come. His confidence is sky high and that shows in his performances.
The thing I like most about Luke is his attitude: he wants to gig, he turns up eager to get on stage and he gives everything he can in each show. He also knows he hasn't reached his potential yet, he is very honest about where he is at musically, but he is growing and learning with every show he does and his willingness to learn is what will take him places.

When I asked him about The 100 gigs in 100 Days he said ''I've been passionate about music for years and I've always enjoyed gigging. In order to better myself as a live performer I found that doing as many shows as possible is the best way to hone my craft. However I realised that just gigging to promote myself wasn't enough, I'm doing loads of gigs and being in front of lots of people and I thought I could do something positive through music and promote the great work of The Alzheimer Society to help and raise awareness for a good cause''

For someone so young to have this attitude is just what is missing from the music scene. Too many people are after fame and fortune, and the music industry can be a very tough place, but Luke Carey is coming at it from a completely different angle, he wants to perform, but at the same time he wants to make a difference.

To find out more about where you can catch him on one of his 100 gigs in 100 days Like his Facebook pagewww.Facebook.Com/LukeCarey1