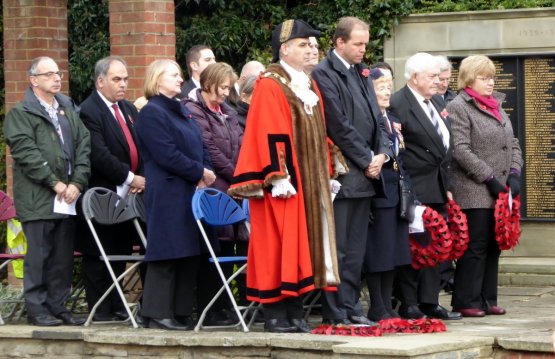 On November 11th around 200 people gathered together at the war memorial in Broomfield Park with groups of children from Hazelwood and Bowes primary schools and Broomfield Secondary School for a service to commemorate the lives lost by those who served in the First World War (and later wars).

History of the Armistice Day service in Broomfield Park

The first Armistice Day service in Broomfield Park took place in 1929 after the erection of the Garden of Remembrance and its war memorial. The original World War 1 memorial was composed of 4 plaques listing 525 names of local men in the armed forces who died fighting in World War 1 and a cairn of stones was built with the inscription ‘Each stone represents a life laid down’. After the Second World War the memorial was extended to include those men and women who died in that war (two large outer plaques which list 573 names of both civilians and armed forces) and the annual Armistice Day service continued to be held until the end of the century. However, the service had lapsed by the start of the 21st century. When the Friends of Broomfield Park were formed in 2008 it was decided to reinstate the service and Derek Honnor and Henrietta Burton from the Friends group made the arrangements for the first service.

The Rev. Hazel Miall from Christ Church, Southgate conducted the service this year and began by explaining that it was intended for people of all faiths as well as those with no faith. It took the form of a Christian service as that was how it would have originally been conducted and was appropriate in this centenary year (and 75th anniversary of the opening of the Garden of Remembrance).

During the service poems of remembrance were read out by:

* Charlie Gavriel from Broomfield School who composed his own poem ‘It’s hard, I can’t see’. He was chosen as a representative of his school who visited the battlefields in Flanders last year and brought back soil for the new memorial garden at Wellington Barracks which was opened by the Queen.

* Derek Honnor and Roger Blows who read ‘Naming of Parts’ by Henry Read.

* Tony Elliott and Freddie Burton (aged 7, from Hazelwood School) read the famous excerpt ‘They shall grow not old….. we will remember them’ from For the Fallen by Lawrence Binyon.

* The Kohima Epitaph ‘When you go home tell them of us and say, for your tomorrow we gave our today.’ was read out by the President of the British Legion.

After the two minutes silence a bugler played the ‘Last Post’ and wreaths were laid at the base of the cairn. The Mayor of Enfield, Cllr Ali Bakir, David Burrowes, MP for Enfield Southgate, The British Legion, and the Friends of Broomfield Park laid wreaths as did children from Bowes, Broomfield and Hazelwood schools.

The service began and ended with a medley of songs dating from the time of the First World War sung by the three classes of Year 6 children from Hazelwood School accompanied by their music teacher, Cathy Halpern.

At the end of the service David Burrowes thanked everyone for attending and, in particular, Henrietta and Tim Burton for organising the event and arranging the sound system respectively. Tony Elliott also thanked the gardening staff in the park for their hard work maintaining the Garden to a high standard.

Finally, everyone was invited to visit the new Palmers Greenery café which was selling ‘wartime’ cakes with the proceeds going to the British Legion. I can recommend the ‘trench’ cake which, although I had been slightly worried about what its ingredients might be, tasted delicious. The Conservatory was also opened after the service so that everyone could get warm and look at the wonderful array of plants. This year the Conservatory has been awarded a bronze medal in the Enfield in Bloom competition.

Am I alive? Barely breathing

It's cold, I can't stop shivering

It's a war, fight for what?

We’re hungry, cold, tired, where is my home?

It's loud, there's another explosion.

But that someone is me.

My nightmare is over.