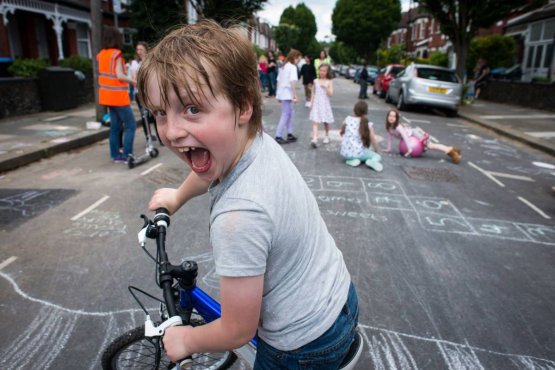 Palmers Green is about to become a trailblazer for a new wave of child-friendly communities: places where children have the support, freedom and confidence they need to become more independent, autonomous citizens in their neighbourhoods.

In 2011 London started its Play Street journey. Using existing legislation, residents of a street could come together with the Council and agree a time slot to close it to through traffic. Typically three hours long and often on a Sunday afternoon or perhaps Friday after the school week, children were free to play on a traffic-free road

Children discovered other children on their own street, building links which often developed into fully fledged friendships. Adults discovered neighbours who became true neighbours and friends. More social events and more looking out for each other and the children of the street emerged.

Now with two thirds of London Boroughs having at least one Play Street, the next stage is about to unfold – Play Quarters. What works in one street should work just as well in a wider area of many streets, parks and schools.

Palmers Green with its established Play Streets and a spectrum of community-centric events has been chosen to pilot Play Quarters for London. A dedicated leader will be in place from early in 2017, supported by The Big Lottery Fund, under the direction of the charity London Play.

So what can Palmers Green expect to see?

* More Play Streets. These will be “joined up” with a schedule so children in one street can build new friendships with children in nearby streets;

* Safe walking routes to the park will be developed on weekends with walking groups led by the dedicated leader. Local parents have already formed a group to enhance and expand Broomfield Park’s playground;

* Local retailers and food outlets will be encouraged to develop a discount scheme on healthy eating options for local children;

* Shops will have signs highlighting them as Play Quarter partners so showing children that the whole community has their wellbeing in mind;

* “Play and Childhood” awareness sessions will be delivered for the public service workforce – street cleaners, traffic wardens, bus drivers, the local police and more to ensure the area is “child ready”.

And there will be work with schools looking to introduce play street sessions at the start and end of the day and to reduce school run traffic to the minimum.