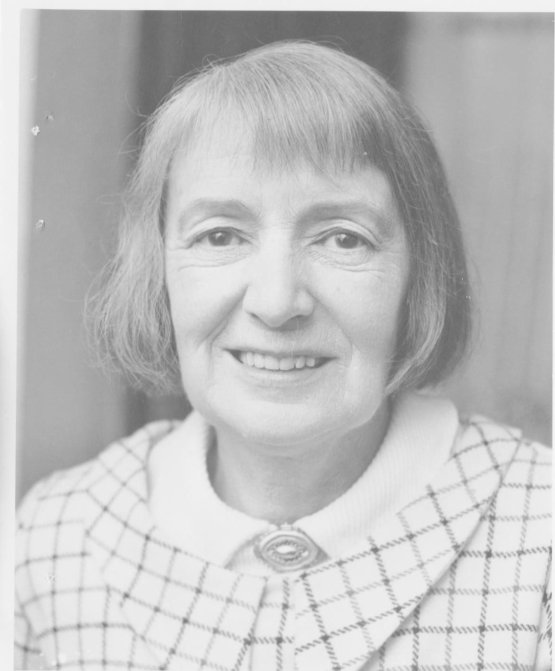 Pictures and poems With permission of the Estate of James MacGibbon’

If you mention Palmers Green, people will often say, ‘Stevie Smith’ or ‘Not waving but drowning’, and quote a few lines of that much-loved, famous poem. Stevie Smith (born Florence Margaret Smith in 1902), was nicknamed ‘Stevie’ because her fringe resembled that of the jockey Steve Donaghue.

As a writer, Smith is noted for her sad eccentricity and mischievous humour, often giving a familiar acerbic twist on common songs, myths, nursery rhymes and hymns. Her fame is world-wide, reaching far beyond perhaps what she might have imagined. That’s pretty amazing for a small, thin, unobtrusive woman -- at once witty and original, lovable and formidable as many have described her, but who happened to be one of the most remarkable of 20th century poets. Her biographer, Frances Spalding, notes that when asked for biographical details, Smith summed up her life: ‘Born in Hull. But moved to London at age of three and has lived in the same house ever since.’ That house, 1 Avondale Road, N.13, is still there, mostly unchanged except for an English Heritage blue plaque unveiled on the 16th September, 2005 by one of her admirers, the then Poet Laureate Andrew Motion. An account of this plaque ceremony which drew people from as far away as Cardiff was detailed by Anne Bryan, a Stevie devotee who organises a remarkable Stevie Smith website. http://www.strange-attractor.co.uk/stevie.smith.index.htm

The following statement from Anne Bryan’s website captures much of why Stevie Smith is an enigma but also very popular.

'‘Stevie Smith is frivolous yet serious, an expert tightrope walker whose poems are both devastating and bracing, childlike yet sophisticated; they celebrate life and death, love and anger, fables and truth. Her semi-autobiographical, 'Novel on Yellow Paper', was an instant success in the 1930's and she became popular again in the 60's for her readings on the radio and on stage.’'

Some critics have considered her work to be lightweight, but she has had many admirers – prominent among them, Sylvia Plath who confessed herself to be a Smith addict, and wrote that Stevie was one of the poets who were 'possessed by their rhythms as by the rhythms of their own breathing’. Seamus Heaney was also an admirer. It is pleasing to hear that Faber & Faber are preparing a completely new edition of the complete poems (currently out of print) with previously unpublished poems and notes added -- due for publication in autumn, 2015

Stevie Smith (1902-71) lived at 1 Avondale Road, N13 until her premature death from a brain tumour in 1971. She celebrated the house (‘a house of female habitation’) in her poem 'A House of Mercy', and it is now a place of pilgrimage for Stevie admirers world-wide.

She was sometimes critical of Palmers Green, ‘dear suburb of my infancy’ as she called it, but she loved it too, its green spaces, especially Grovelands Park, and often mentioned it in her work - eight books of poetry and three novels. At the same time, her refusal to leave this North London suburb seemed to many to enhance her eccentricity. Above all, Palmers Green was the home of her beloved Lion Aunt and where she found much inspiration and the quiet needed for her creativity . She said of poetry, ‘The human creature is alone in his carapace. Poetry is a strong way out.’ It became her life.

Palmers Green celebrated that life with a ten-day Festival of events from 13th – 22nd September, 2002, ‘Ten Days with Stevie Smith’. As Festival co-organiser, with Joanna

Cameron from Palmers Green Bookshop, our idea was to draw attention to Smith’s poetry and novels – especially for those who may not know her work.

Festival events, taking place mainly in St. John’s, were a mixture of talks, poetry readings, events for children, Hugh Whitemore’s play ‘Stevie’, and a ‘Stevie’ walk around Palmers Green featuring places with a Smith connection, all well-attended with enthusiasm and interest

On the 22nd September, we had all gathered at 1 Avonndale Road for the finale, a little sad because it was nearly over. Suddenly with a mixture of serendipity, BBC’s Poetry Please and Festival planning, we heard Stevie’s great voice thundering down Avondale Road: ‘Nobody heard him the dead man’ from ‘Not Waving but Drowning.’ Breathtaking. It was magical. She then read two more favourites: ‘The Galloping Cat’ and ‘Tenuous and Precarious’. Stevie was back in Avondale Road.

With permission of the estate of James MacGibbon

Nobody heard him, the dead man,

But still he lay moaning:

I was much further out than you thought

And not waving but drowning.

It must have been too cold for him his heart gave way,

Oh, no no no, it was too cold always

(Still the dead one lay moaning)

I was much too far out all my life

And not waving but drowning.

She wrote occasional witty pieces such as this excerpt from

Bark well as well you may

If you lived anywhere else

You would not be so gay

He told his life-story to Mrs. Courtly

Who was a widow. ’Let us get married shortly’,

He said. ‘I am no longer passionate,

But we can have some conversation before it is too late’.

It was my bridal night I remember,

An old man of seventy-three

I lay with my young bride in my arms,

It was wartime, and overhead

The Germans were making a particularly heavy raid on

What rendered the confusion worse, perversely

Our bombers had chosen that moment to set out for Germany.

Harry, do they ever collide?

I do not think it has ever happened,

Oh my bride, my bride.

In 2012, her poem ‘The Year of the Tree’ was featured on the Guardian Poem of the Week Blog. www.katherine-gallagher.com

Are you a Poet? Why not enter The Enfield Poets 2014, International Poetry Competition. visit http://enfieldpoets.com/competition/ for your chance to win £500