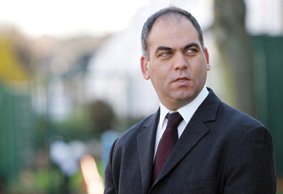 new member of Parliament for Enfield

Southgate. It is a huge honour and privilege

to have won the support of the majority of

voters and I have already started doing

People have asked me what’s it like being a

starting your first day at a new school where

and discover your new surroundings. As with

all new starts there are a number of things

that have taken some getting used to.

The first thing has been getting used to a new

work environment. Most MPs have offices in

the very modern Portcullis House which is

get an allowance to run their office and which

sometimes months to get allocated an office

and in the interim new MPs have to find

space to work in. At the time of writing I am

still without an office but luckily I have been

able to secure a temporary perch in another

MP’s office. The other place I will often be

required to attend is the House of Commons

chamber which is so familiar with its green

benches and dark veneer wood and yet so

odd with its unusual procedures such as

turning with your back to the chamber at

Another thing that I am getting used to is that

more people recognise you than ever before

and you are sometimes asked for selfies

which although I find it flattering to think that

anyone would want a selfie with me I am

A further thing is that I now get lots of media

requests ranging from interviews with the

print media to live radio and television. I seem

to have had slightly more interest than some

of my new colleagues but many of the new

MPs seem to be asked to do media requests,

primarily because we are all new.

Finally, although I was used to getting

casework e-mails, letters and phone calls as a

councillor the volume is significantly higher

and every day the casework comes thick and

fast. I try to answer them as quickly as

possible and as thoroughly as I can.

As with all elections one person’s triumph is

another person’s defeat and I pay tribute to

Southgate and his 23 years of public service

first as a councillor and then as an MP. All

MPs try to the best they can for their

for his constituents in his time MP.

I want to thank everyone who voted on 8

expectations on me as the new MP and I will

work hard to ensure that all the people of

Enfield Southgate are well served by having

me as their MP.