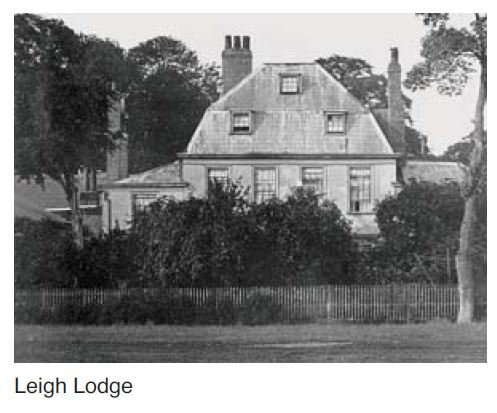 Hunt’s grandfather claimed descendants from Royalists who fled to Barbados after The Civil War.

Leigh Hunt's own father had to flee Philadelphia for his loyalist views in 1775 leaving behind a pregnant wife and three sons. When she caught up with him he was an impoverished preacher in London. Fortunately The Duke of Chandos, one of the few who was impressed by his sermons, offered him a position tutoring his son in Southgate. It was here that our James Henry Leigh Hunt was born in 1784 and named after his father’s pupil. His inherited Bajan good looks were offset by his forefathers mendicity.

A precocious child, he was sent to Christ’s Hospitallers School where a speech defect prevented him studying for the church or law. He became a theatre critic and his independent reviews established him as a writer. However it was his forthright views that got him in trouble with the establishment. He avoided censure for his attacks on George 111 and military floggings but when he libelled The Prince Regent his fate was sealed. The press had referred to the future George IV as "An Adonis of Loveliness" but Hunt called him “corpulent gentleman of fifty... A violator of his word..., a despiser of domestic ties, the companion of gamblers and demireps”.

Refusing to make a public apology Hunt landed in Gaol for two years. Prison increased his veneration however, and he received letters from Shelley and visits from Charles Lamb. He was given a hero’s welcome on his release and Keats dedicated a poem to the event. Hunt was now in his element mixing with London Literati and becoming intimate with both Shelley and Keats. When Shelley moved to Italy in 1818 he invited Hunt to join him there to edit a magazine with Byron. Hunt’s perennial poverty delayed his departure for three years. He finally embarked from. Blackwall in November 1821 with his wife Marianne, five offspring and their pet goat all crammed into a small cabin. Unfortunately after departure a storm brew up and the Hunts were dashed from one side of their cabin to the other. After five days they saw dry land and pulled into the haven of .........Ramsgate! They finally met Shelley on July 1st 1822 seven months after setting out. They fell into each other's arms but tragedy struck and Shelley was drowned within weeks of their reunion.

family. Byron decamped to Greece where he died in 1824 and Hunt was forced to return to London in 1825 where he repaid Byron by penning a less than flattering biography of the poet.

This and other projects failed to erase his penury despite pensions from Mary Shelley and Lord John Russell. His nadir was when Dickens, who at first admired Hunt, lampooned him with his character Herbert Skimpole in Bleak House. Despite Dickens protestations everyone recognised the source of the character.

of the great talents he mixed with 35 years earlier. He generated conflicting opinions amongst his contemporaries who revered his company but as Thomas Carlyle said

"Hunt was to be used with discretion".

Leigh Lodge in Southgate, later known as Eagle Hall was badly shaken by bomb damage in the Second World War and was demolished in 1941. The road adjacent to the Southgate Fire Station now bears his name, Leigh Hunt Drive.