Past Times, Southgate Circus as featured in our October magazine

Long before Southgate Circus came into being the junction was known as ‘Five Ways Corner’; the five ways being Chase Side, Chase Road, Winchmore Hill Road, Bourneside (later renamed The Bourne) and High Street. Before ‘Five Ways Corner’ came into existence, the area was rolling green countryside.

Southgate gets its name from the fact that it was situated at the old site of the South Gate into Enfield Chase. At that time the area was heavily wooded and was used by Royal parties hunting on horseback.

The early 19th century saw the area thinly populated and relatively undeveloped. Southgate lay between two main roads (Green Lanes and the Great North Road) and much of the land formed part of great estates, particularly Grovelands and Arnos. The land owners of the time preferred to keep Southgate rural in order to protect their own amenities.

Before the turn of the nineteenth century, Southgate Circus was often known as ‘Bunkers Corner’ after George Bunker. He set up business as a wheelwright and ironworker in 1804 and this was carried on by three subsequent generations in a large clapboard building. The business thrived serving the needs of the community, the landowners and farmers long before the coming of the motor car. The premises were demolished in 1897 and were replaced with shops. It was these shops that later made way for the tube station that stands exactly on the site of the old Bunker’s Shop.

The first attempt at suburban development in Southgate dates from 1853 when a large tract of land bounded by Chase Side, Chase Road and Bramley Road was sold for building. Development along Fox Lane meant that Southgate was for the first time linked to the centre of London town. Despite these first tentative steps being taken towards urbanisation, up until 1914 the district remained predominantly rural.

Even after World War I relatively little development had taken place. The Southgate House Estate (Meadway etc.) was developed from 1924 onwards. By this time the end of rural Southgate was in sight. Perhaps recognizing this fact Southgate Council had taken the wise precaution of acquiring land as public open space: Grovelands Park (1913), Arnos Park (1928) and Oakwood Park (1927).

Southgate Underground Station was approved in 1930 and opened on 13th March 1933 as part of the northern extension of the Piccadilly Line. This seven mile extension beyond the original terminus of Finsbury Park required a parliamentary act and was to serve the enlarging suburban areas in north and west Middlesex. The Piccadilly extension line stations were commissioned by Frank Pick (1878-1941) and designed by architect Charles Holden (1875-1960), who together created an architecturally distinguished group of buildings.

Charles Holden was a notable Arts and Crafts architect in the Edwardian period that uniquely made the move to modernism, following a 1930 study tour (with Pick) of continental railway stations and modern architecture. At the time Holden's designs set the 'house style' for London Underground and Southgate station is arguably one of the most visually impressive and dramatic stations on the entire network.

Like Arnos Grove, Oakwood and Cockfosters, Southgate was awarded a Grade II listed status on 19 February 1971 and retains much of its original decoration. The station is built in the Art Deco design style using brick, reinforced concrete and glass. The station building is circular with a flat projecting concrete roof. The roof is actually supported ‘umbrella-like’ from a central column within the ticket hall. The flat roof of the station building sits on top of a projecting, illuminated band of metal and blue glass carrying the station name. The escalators have spectacular uplighters formed of ribbed, metal columns, with bowl-shaped light fittings that descend down to the platforms.

Although its design may be considered timeless the station is not without change: in the late 1990s, one of the three entrances was filled in to be used as a new ticket office, and due to the design of the automatic barriers, one of the two remaining entrances was made into an exit only. In 2008 the station was extensively renovated, with new tiling at platform level, a partial new floor in the main ticket hall, and improved signage throughout. The station won the London Regional category award at the 2008 National Railway Heritage Awards for the modernisation of a heritage station.

The preserved condition of the station's original features, particularly the escalators, makes Southgate popular for filming scenes for period dramas, including scenes for the 1999 version of the film, The End of the Affair. 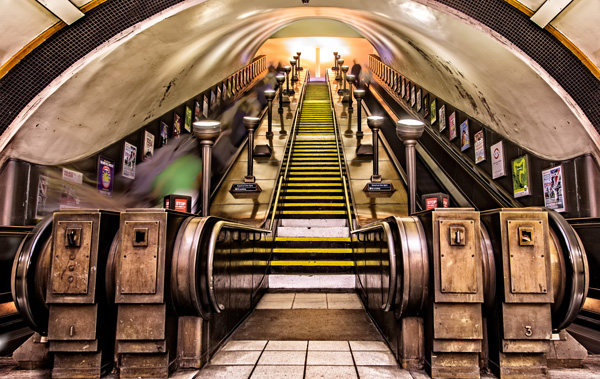