Past Times The tale of the New River by Ellie Sales 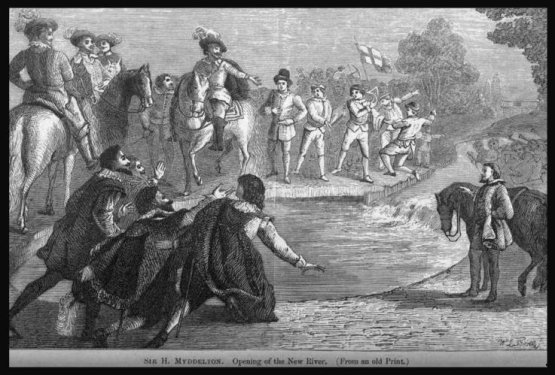 The New River is neither new, nor a river. It is a water supply aqueduct, completed in 1613, to bring drinking water from Hertfordshire to North London. You have probably crossed it many times as it runs parallel to Green Lanes through Winchmore Hill and Palmers Green.

Building the New River marked the start of the water industry, and it still remains an essential part of London's water supply. Up to 220 mega litres are carried along the channel daily for treatment, which represents some 8 per cent of London's daily water consumption.

Before 1600 London’s water supply was limited to the River Thames, local streams, wells and springs. These sources, often contaminated, were distributed by sellers carrying water in wooden buckets. In 1600 Edmund Colthurst had the idea to bring water from the springs in Hertfordshire and Middlesex to London. Letters Patent were granted by King James I in 1604, and Colthurst, at his own expense, started to cut a channel from Chadwell Spring.

Unfortunately lack of money soon halted these works. In 1606 a Parliamentary Act was granted and in 1609 the authority to carry out the works was given to Hugh Myddelton, a golds- mith and merchant adventurer, who proceeded to build the New River over the next four years.

By 1611 Myddelton realised he would not have the money to complete the project. King James I agreed to provide half the cost of the works on condition he received half the profits and that the New River could be constructed through his palace grounds at Theobalds. The King’s involvement overcame all opposition from local landowners to the scheme. Construction of The New River followed the 100ft contour of the Lee Valley in order to maintain its level. The total fall on the 62 km (39 miles) of the original course was only 5.8 metres (i.e. approx. 10 cms per km). Over 200 labourers were paid the equivalent of 4p a day to dig out the New River channel. Skilled carpenters received the equivalent of 6.5p a day to wharf the banks and erect bridges. Banks were raised and strengthened with clay to stop leaks. The water was brought to the city streets via hollowed-out elm pipes. The total cost of the construction was estimated at £18,500. The impressive feat of engineering was completed in 1613 when a formal ceremony took place at the Round Pond in Islington; this is sited near the present New River Head, just below Sadler’s Wells. A play was staged to celebrate the opening which was attended by the Lord Mayor and Aldermen of the City of London.

Both the New River’s carrying capacity and its sources of supply have significantly changed over time to meet rising demands for water. The original water sources at Chadwell and Amwell Springs, providing a maximum of 10 megalitres per day, were supplemented by the 1738 Statute that allows up to 102 megalitres to be taken daily from the River Lee. This level of supply was doubled in the mid 1800s with the construction of pumping stations to abstract water from deep wells along the New River. The course of the New River has also changed with many bends on the original course being straightened by construction of new direct river channels or pipeline sections and the watercourse shortened; it now ends at Stoke Newington, a length of some 38 km (24 miles). The water level in the New River is regulated by means of sluice gates to meet the requirements of the pumping stations and reservoirs. In addition a series of boreholes, constructed in the 1990s along the New River, enable surplus treated water to be stored in the chalk aquifer (the ‘Artificial Recharge Scheme’) and then pumped into the New River when extra water is required.

A similar scheme today would present a daunting challenge. In 1609, without mechanisation and the earth moving equipment we now possess, it was a remarkable achievement and a lasting tribute to all who took part.

Since 1992, Thames Water has worked with local people and partners to create a 45 km [28 mile] long-distance footpath that follows the course of the New River, linking the inner city to the open countryside. The route follows, wherever possible, New River`s starting point near Hertford to its original end in Islington.