Poetry for all in Palmers Green

A group of local poets has been appointed Poets in Residence at the newly refurbished Palmers Green Library.  Their residency will be launched at a free public event on 13th February. Starting at 2pm in the Library's Community Room, members of the group will be giving short readings of lively and engaging poems that they have written.  Refreshments will be available and books published by the local poets will be on sale.

Poetry in Palmers Green was set up around eight years ago by Joanna Cameron, Katherine Gallagher and Myra Schneider, following the closure of the Palmers Green Bookshop, where Joanna Cameron was manager and organised poetry readings and other literary events.  As is evident from their logo, the group takes pride in the fact that for almost her entire life Stevie Smith lived locally, in Avondale Road.

Poetry in Palmers Green organises two major poetry reading events a year, both held in the Parish Centre behind St John the Evangelist Parish Church on the corner of Green Lanes and Bourne Hill.  The group has also run one-day workshops for poets, but in recent years has been unable to find a suitable location.  The new arrangement with Palmers Green Library means that it will now be possible to run a workshop during 2016, probably on 9th April, when the tutors will be Katherine Gallagher and Myra Schneider.

The next of the twice-yearly readings will be on Saturday 16th April.  The programme will include London poets Mario Petrucci, Danielle Hope, Timothy Ades (poet/translator) and Mo Gallaccio with a debut pamphlet together with Gill McEvoy from Cheshire, who has just won the Michael Marks award for a new pamphlet. 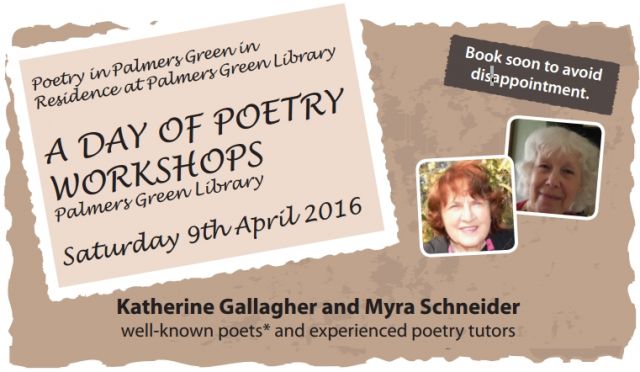