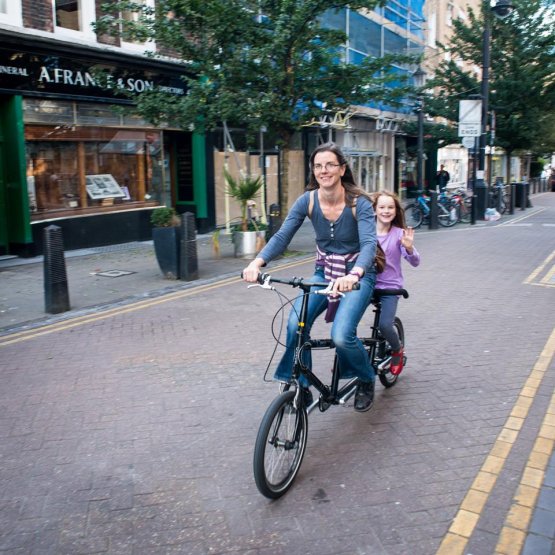 Now that I only have one child to take to primary school, I’ve bought a tandem. We use it whatever the weather. My 8-year-old loves pedalling with me; we’re both fitter; and with no need to park, it’s the fastest way to get from Palmers Green to school in Southgate.

It’s great. But when we pass children struggling along on their bikes on the pavement, or stuck in the back of a car, I think: I wish all kids had the choice to cycle. Even those without a parent daft enough to ride a tandem. Even on the road. But who’s going to let their child cycle on roads around here?

Roll on Mini Holland! Those protected bike lanes will not be for “cyclists”. They will be (I hope) for children on bikes – their parents’ or their own – going to school. They will be for anyone who can’t drive, or wants to do local trips without getting in a car. The Mini Holland plans won’t force anyone to cycle, but at least riding a bike will finally be a valid option.

What else will it be good for? Enfield’s economy. A friend of mine was in Enfield Town the other day when a bomb scare closed the high street to traffic. She suddenly saw the pretty old market town Enfield used to be. A high street without cars is somewhere you’d want to linger, and Enfield’s – with its 20% vacancy rate – desperately needs shoppers to linger. Roll on those plans to take the cars off Church Street.

And Enfield’s health. Chase Farm Hospital staff are very keen on Mini Holland. No wonder, when physical inactivity costs the country £47bn a year – a “slow motion car crash”, says NHS England’s CEO. Sitting is the new smoking. I feel much better for replacing short car and bus journeys with my bike – or my feet. I don’t have time for the gym, but exercise by going where I need to go doesn’t feel like exercise at all. (And it’s free.) Mini Holland should make more people feel safe to do the same.

Mini Holland is bringing us into the 21st century. All over the world people are realising that car-centred towns don’t work for anyone – not even drivers. Car-free days and bike schemes are proliferating from Paris to Jakarta. But strangely, all proposals to take road space from cars meet what one blogger calls “the same confused, tired arguments… it will ‘cause’ congestion; this isn’t the Netherlands, people won’t cycle because of winter/hills/culture; ‘cyclists’ are a minority who don’t deserve special treatment; nobody will use the cycling infrastructure”.1

He wasn’t even writing about Enfield. These arguments crop up everywhere, from here to California. Even 1970s Holland saw people violently opposed to bike lanes. We don’t like change; we can’t imagine how it will work. But I predict that – as in so many other places – a year after it’s installed, no one will remember what all the fuss was about.

So, roll on Mini Holland. You can’t get here soon enough for me

Clare Rogers lives in Palmers Green and blogs at www.subversivesuburbanite.wordpress.com.