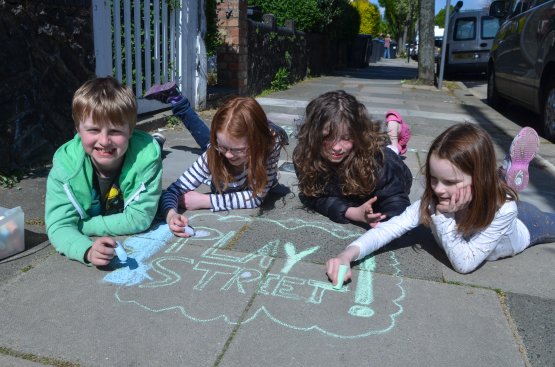 Did you play out on the street as a child? It was commonplace in the 1970s and earlier; but now it's rare to see children out on the pavement near their homes, skipping or hopscotching or chatting to friends. Parents' fears of traffic and 'stranger danger' have driven children indoors. Outings tend to be only when adults have time to act as escorts in the park, or on play dates. The result? A generation who have little freedom, independence, exercise, and who – like their parents – often don't know their own neighbours.

However, a scheme to change this trend is gathering momentum across the country. As residents of Devonshire Road in Palmers Green, we are proud to be the first street in Enfield to officially become a 'play street'! Our road will close to traffic for a couple of hours on Sunday 1st June, the first of a series of monthly closures to allow street play. Aiming to bring residents together – and to see the street as a social space, not just a rat run or a car park – the year-long programme is supported by Enfield council, who have granted us a 'Temporary Street Play Order'. Neighbours will act as stewards, redirecting traffic and only allowing residents' cars in and out at walking pace.

Devonshire Road residents first organised a road closure for play in 2011, and again in 2012 for a street party. On both occasions children were let loose with scooters, pavement chalks, scooters and skipping ropes. One neighbour says, 'It was amazing. The children were so excited to have the freedom of the whole road to play in, and I finally made friends with a neighbour who I didn't know, even though we'd lived opposite each other for ten years.' Another mum said, ‘I can’t believe that my son spent a whole afternoon running around on the street instead of playing on his X-Box.’ After a difficult debate in the street with passionate opinions for and against, a vote involving every household returned a large majority in favour of the temporary play street order.

The idea comes from 'Playing Out', an initiative started by two mums in Bristol four years ago. It quickly spread, including to London. London Play, a charity that promotes active outdoor play for children, has also supported residents in their efforts to establish regular play events. Many London boroughs already have such schemes – in Hackney, nearly 20 streets hold regular play street closures; Waltham Forest, Southwark, Haringey and others also have regular events; and London Play have advised almost every London borough in the last 12 months. They hosted a national conference in November last year, attended by Mayor Boris Johnson and MP Diane Abbott, and Devonshire Road residents were invited to address the delegates.

We hope that this idea will spread and inspire other streets in Palmers Green and the rest of the borough. Organising our play street has not only given our children a fantastic taste of freedom and fun outdoor exercise, but it’s been a powerful catalyst for friendship among neighbours, including those without children. We never dreamed before we started this that any street in London could become such a friendly place.

To hear more about the idea or to find out how you can organise your own play street, please get in touch: contact Richard Crutchley (bethsaysboo@gmail.com) or Clare Rogers (chocrogers@hotmail.com). You can also find lots of information at the Playing Out website, www.playingout.net.