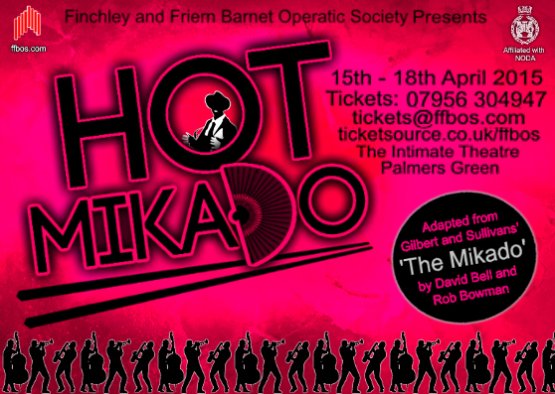 At the heart of Palmers Green, there beats a vibrant and active community. Its interests stem from food, good coffee, clothes, socializing and most interestingly, live theatre. With live theatre duly accommodated across North London with an array of venues stretching from Potters Bar through Edmonton and up to Barnet, there is one particular location that sits snugly in Palmers Green and is the focal point of its engaged theatre community. That is of course The Intimate Theatre. Once a go-to place for professional touring theatre companies and was host to such famous names as David Bowie, Richard Attenborough and Roger Moore, you can now find the 320 seated theatre home to a number of amateur musical theatre companies such as Acorn Theatre Company, Saint Monica’s Players, Protos Theatre Company, The London Pantomimers and the Finchley and Friern Barnet Operatic Society.

The Finchley and Friern Barnet Operatic Society, or FFBOS as they have come to be known, perfectly encapsulates the community spirit that is embodied within the Intimate Theatre in Palmers Green.

An active musical theatre society, the group has enjoyed over 90 years of performing shows with 2012 being their 90th year. Performing two shows a year and enjoying a steady influx of new members eager and keen to take to the stage and perform, the company has performed musicals ranging from traditional classics such as The Sound of Music and Annie, to more diverse and new shows such as HONK! and Footloose. With every production, rehearsal and social event, there is a constant theme that runs throughout the society and its membership and perfectly sums up their ethos as a company, and that is family.

The society’s involvement spans a number of generations with current President Ian Thomson seeing many family members such as his daughter and grand-daughter take the stage for the group in past years, and his mother acting as the company’s wardrobe mistress. And that is just scratching the surface with the company witnessing many relationships blossom on and off the stage throughout the years.

As a community group whose interest is performing, the society has also taken a very active role in raising funds for various local and nationwide charities. With their preferred charity Noah’s Ark Children’s Hospice receiving regular contributions through small fundraising efforts such as Christmas caroling, the society has also donated to Macmillan Cancer Care, Philippines Disaster Fund and more recently Cherry Lodge Cancer Care, a Barnet based hospice. This was in conjunction with their last production in November, Mack & Mabel for which the society hosted a Gala Night for Cherry Lodge’s community. This evening was to be attended by the group’s current Honorary Vice-President, musical star Elaine Paige (herself a Barnet girl) who had recently taken on the title of Vice-President since the passing of former Vice-President Lady Thatcher in 2013. Miss Paige was unable to attend last minute due to illness but fully endorsed the night and looks forward to attending FFBOS performances in the not too distant future.

Despite the society’s amateur status, the group has thrived for excellence and to be the best. This has been reflected with a number of NODA award nominations in the past few years as well being bestowed two prestigious NODA flame awards in the last five years, for the pursuit of excellence in live theatre. The level the society it sets itself towards has been a benchmark for which performers have aspired to and a platform for them to enhance their abilities as artists. The society has seen a number of faces go on to bigger things such as the West End, Film & Television and performing across the globe. Who knows who will be the next star to come from FFBOS’s ranks? Watch this space!

As 2015 has come upon us, the society is now working hard on their spring production, Hot Mikado. Adapted from the Gilbert & Sullivan operetta The Mikado, this radical re-telling of the classic story brings a modern twist to the popular tale about the wandering minstrel Nanki-Poo and his love for the fair maid Yum-Yum. Expect hot jazz solos, big swing numbers and sharp zoot suits, as FFBOS brings this fantastic show to life. This toe-tappingly fun show will be coming to the Intimate Theatre in Palmers Green, for one week only, so we urge you to come on down and let FFBOS entertain you with a performance that we guarantee will have you leaving the theatre with a huge smile across your face.