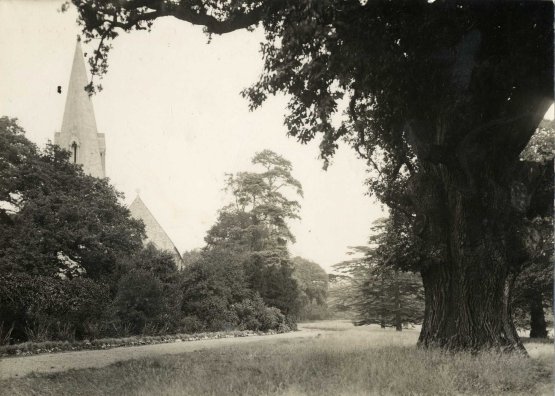 Its great trunk rooted in history, its leaves bathed in the memory of 800 Summers are in themselves the remembrance of things past

This is essentially a story of linkages in terms of people, places, community groups, and local history. Of all the trees in Great Britain The Oak, (Quercus Robur) is considered to be the King of trees. Famed for its endurance and longevity it is synonymous with strength and steadfastness. The Oak was held sacred to Zeus and Jupiter and in the classical world it was regarded as The Tree of Life, its deep roots penetrating into the underworld and its branches soaring into the heavens; priests would divine the pronouncements of the Gods by interpreting the rustling of the Oak’s leaves. Pliny wrote in the first Century, that Druids performed all their religious rites in oak groves where they gathered mistletoe from the trees using a golden sickle. Many early Christian Churches were situated in oak groves probably because they were sites of earlier pagan worship. Dense Oak forests once covered the South East of England, people built their homes in the oak forests, using oak as a resource for building houses, furniture, barrels, sticks for kindling and charcoal and acorns for milling into flour or for feeding to herds of pigs. Oak bark was used in the leather tannin process and as a medicine. The Minchenden Oak formerly called The Chandos Oak is the last vestige of the Ancient Minchen Wood as noted on the 1600 pre Enclosure Act plan which showed this area of Southgate and Palmers Green covered by extensive dense oak woodland. The Minchenden Oak is an ancient pollarded English Oak, and in 1883, was reputed to be the largest in England, with a spread of over 126 feet and a reported girth of over 21 feet, it is thought to be between 600 to 800 years old. Two limbs were lost in a gale in 1899 and in 1900 it was reported to have a spread of 136 feet and a height of 60 feet.(The oldest Oak Tree in England is the Bowthorpe Oak in Lincolnshire thought to be circa 1,000 years old) The tree represents the last vestige of the extensive ancient oak woodland which was characteristic of this area some of which still remains around the perimeter of The Walker Ground and in Arnos Grove Park. The Minchenden Oak Garden is a remnant of the extensive Minchenden Estate owned by The Duke and Duchess of Chandos who lived at Minchenden House located nearby on The Green. The house, now demolished, and the estate was subsequently absorbed into The Walker families Arnos Grove Estate in 1836. The remaining oak woodland was felled in 1939 after Lord Inverforth had sold the Arnos Grove Estate for residential development which remains today. The tree and the garden were saved from development by Southgate Borough Council for the community and it now serves as a reminder of the links that this area has with the past. The Minchenden Oak Garden was created as an evergreen Garden of Remembrance and was opened on 12th May 1934 by the vicar of Christ Church and the Mayor of Southgate. The garden is fully enclosed and remains one of Southgate’s secrets. Over time the garden was neglected, became overgrown and fell into disrepair until 2013, when Southgate Green Association formed The Friends of The Minchenden Oak Garden and secured a grant from the Enfield Residents Priority fund to restore the garden and to promote its use as a community asset. The Friends group of volunteers set about: clearing the undergrowth, opening up overgrown areas, planning how the garden could be enhanced and opened up for the benefit of the wider community. The works completed so far include the removal of dead trees and the installation of a new boundary fence. The Minchenden Oak was surveyed and extensive pruning works were carried out to stabilise the tree. A new paved ramped access way was built at the entrance. The unstable boundary wall on Waterfall Road was rebuilt. The entrance gates were repainted. The Yorkstone paved footpaths were re-laid. The dilapidated benching and paving around the oak tree was removed and a more natural oak bark chip setting laid around the tree allowing its roots to breath. New oak bench seating was installed. Bird boxes were made and installed by 6th Southgate Scouts Group. Shrubs and trees were planted. Informative lecterns were installed to provide visitors with the background history of the tree and its environment. On 24th May 2015 the gardens were rededicated by the Bishop of London following the extensive restoration works carried out. The garden reopened to the public on 2nd June 2015 hosting A Big Lunch which is held every year on the first Sunday in June. On Sunday 19th June the garden hosted Southgate Civic Week with an enactment of knights in battle dating from 1216, a the time when the oak tree was an acorn and a performance of a short play written by Alex Woolf, about the Minchenden Oak. Since its reopening the Garden has been a feature of Open House Weekend and is well used by the local community and by visitors from further afield. The Michenden Oak, the centre piece of the garden, is used by The Walker School and Southgate Cricket Club as its emblem. In 1933 it was adopted by Southgate Borough Council and features at the head of the Southgate Coat of Arms the motto being Ex Glande Quercus or From the Acorn, the Oak. The tree serves as a reminder of things past and represents the circle of life, acorn to tree to acorn.

The Friends of The Minchenden Oak Garden are a group of volunteers working with Southgate Green Association to maintain and restore the garden to an even better green space. If you are interested in getting involved why not help us replant the garden, or consider joining us. You can contact us at www.minchendenoak.org or www.southgategreen.org.uk