This History of Conway Rec,N14 - Southgate and their centenary celebrations. 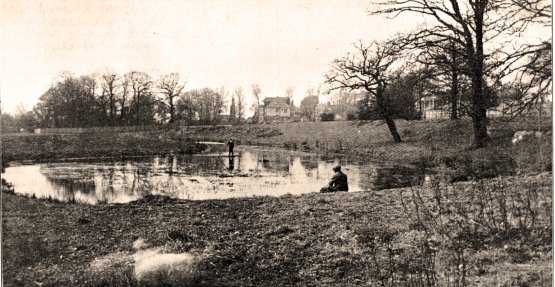 In 1908, the local paper, The Recorder noted: “Not far from Arnos Grove and the village of Southgate, the builders have found an ideal spot upon which to erect houses according to the most recent modern ideas. Southgate is one of the healthiest districts in this country … People are flocking in...” 'In 1902 the British Land Company (BLC) bought 130 acres from the sale of the Taylor Estate and house-building soon began. However, one piece of land remained undeveloped – 2.25 acres located between Cannon Road and Conway Road, N14 which in the years 1911 -1915 were rarely out of the local news.

In 1904 a road, planned to cross the site and join Cannon Road to Conway Road, was abandoned owing to the extensive and swampy pond at its centre. Residents of the surrounding highly desirable houses soon experienced the pond’s mighty stink and giant mosquitoes. The site was a health hazard: in 1911 the Medical Officer reported that, “a nuisance existed in Conway Road by reason of the foul condition of a pond on the property belonging to the BLC”. It was dangerous – several people, including ‘a servant’, fell in the water. Residents demanded action. The Council ordered the BLC to fence in the land and abate the stench. In 1906 the BLC had offered the land to a local developer who balked at the high price.

However in 1911, wanting rid of its troubling plot, the BLC offered it to the Council as an “open space” for less than half the amount; the Council declined “with thanks.”

In 1913 they again offered the land to the Council, but now local residents were petitioning the Council to buy in order to “construct a path for better ease of access” in one direction to the parish church, shops (and the Cherry Tree Inn!), and in the other, a shorter route to “Palmers Green Station and the business district”. Residents of Selborne Road also wanted a footpath to save the long walk to the railway station, but the developer of their road was adamant he wouldn’t sell land unless he could build on the Conway Road frontage. The BLC would not agree to this.

There ensued a long saga of endless council meetings where councillors wrangled over the wisdom of purchasing such a hazard. BLC’s asking price of £600 was beaten down to £450, but the sale did not go through without many a hitch. The colourful details of Council meetings and Reports can be read in The Recorder. One meeting was even held at the Conway site – imagine the dozen or so members of the General Purposes and Lighting Committee, and the Parks and Open Spaces Committee standing on a warm September evening in 1913, all in their stiff collars, dark suits and bowler hats, with the malodorous wafts from the pond drifting across!

Finally the decision was made to purchase the land and construct, pave and light a path between Conway and Cannon Roads and clear out “the famous pond.” Not everyone agreed: “It is a bad bargain at any price”, said Councillor. Frost; “it is simply throwing away £500, and there will be a continual charge to the district to keep it in order.” He objected to spending “so much for the sole benefit of people in the immediate neighbourhood” when so near to Broomfield Park and The Green. Eventually the purchase did go through and the final conveyancing was signed for £532-7-6d (equivalent to £52,000 today).

“Conway Pond, ours at Last” read The Recorder’s headline. “Amid cheers, possibly ironical, the Southgate Council received the news that the Local Government Board had at last sanctioned the acquisition of the famous Conway Road site and its odoriferous pond.” Thanks to the intransigence of the BLC in refusing to allow building on the site, a lovely piece of green space remains in Conway Road.

In 1916, however, in response to the war effort and the demand for self-sufficiency in food, 19 allotments were created on 1.5 acres of the land, which remained until 1923. The popularity of tennis in the 1920s led to the formation of the Conway Road Tennis Club which continues to lease this level land; the stone coping round the pond was constructed when its courts were laid out.

The remainder of the open space is now a park that local residents can enjoy, with a safer, sweeter smelling, wildlife pond!

The Friends of Conway Rec are holding their centenary celebration, combined with ‘The Big Lunch’, on Sunday June 29th from 1-5pm at the Tennis Club and in the Park on Conway Road N14. Edwardian dress optional. All are welcome to join this community event. This event is proudly sponsored by Anthony Webb who specialise in selling and letting properties in Palmers Green, Southgate and Winchmore Hill.