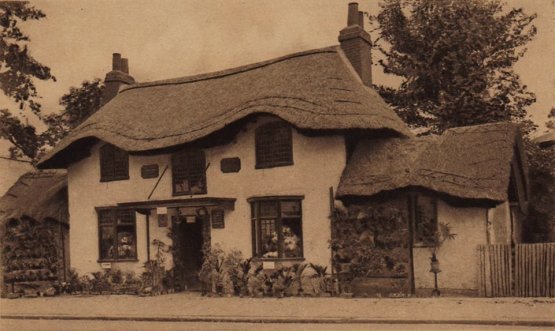 Ye Olde Thatched Cottage remained one of the last links to the old village until it’s demolition in 1938. Originally known as Fern Cottage, it was built around 1790, as a lodge to the big house owned by Thomas Lewis, Governor of the Bank of England. When the cottage was built,  Green Lanes was in the depths of the country and no more than a rutted track along which cattle would be driven up to market. Originally the cottage was occupied by the estate’s gardener and his family

The oak cottage was charming, covered in greenery and flowering ramblers. The main building had chimney stacks at each end and its roof was densely thatched with eye brow windows upstairs, looking out onto Green Lanes.  There were two small single storey additional at each end, also thatched.

Following the great sale of the Taylor Estate in 1902, shop development was gradually beginning to change the face of the highway and the future of the cottage was in the balance.

In 1906, following the widening of Green Lanes, there was no room to accommodate the front garden and its quaint picket fence.  The cottage continued to be used as a single dwelling place until 1911 when the mansion house was demolished and the estate was broken up for development.  The last of these tenants was a Mr Argenti, a wealthy Greek banker and in his spare time the ‘Fairy Godfather of Palmers Green’, who in the summer threw massive hay parties for the local children and at Easter gave them painted hard-boiled eggs.

By now the cottage was looking decidedly worse for wear and it was then that Percy Whellock F.R.H.S stepped in, he brought the lease and converted it into a florist. In 1916, restoration work and the development of 2 acres of Nursery at the rear of the cottage gave it a new lease of life.

Percy Whellock & Son Limited became well-known to many Londoners and provided an attraction for overseas visitors, especially the Americans. Often described as “The old fashioned house in a new-fashioned town”, photographs of the cottage can be found across America.

By the 1930’s the cottage was hemmed in by extensive shop development all around. Its 150 years ended in 1938 when it was demolished to make way for, the building we see today, a new branch of Burton’s, the Gents tailors.

It was a Burton’s tradition that the foundation stone for each new store should be laid by a member of the family, and Palmers Green’s stone, laid by Montague’s son Arnold James Burton, can still be seen at the entrance today.

Around 1970 Westlakes Hardware store was opened by a local family who had previously owned a green grocer located on Aldermans Hill. In 1994, Gee and Denise Mohamed, the current owners, took over the lease a continued to run the successful business for the next 20 years.

Denise said “In over 20 years you get to know what your customers need, we have always serviced locals as well as trades people” In February 2015 Gee and Denise retire. Denise went on to say “We will be sorry to leave Palmers Green, all our friends and customers. Over the years we have watched families grow up, our son’s have all worked with us at one point or another making Westlakes a truly family run business. Whilst we will miss the people, we won’t miss working 7 days a week and look forward to putting our feet up!”

We are pleased to inform you that despite Westlakes closure in mid February, after a refurbishment, it will reopen as Amy’s Housewares, another local family business with 4 other stores located in North London.

The Hermitage on Cannon Hill, Southgate, London N14 is one of the few remaining thatched houses to be found in London today.

Images by permission of Enfield Local Studies and Archive

AS FEATURED IN OUR FEBRUARY PALMERS GREEN & SOUTHGATE LIFE MAGAZINE